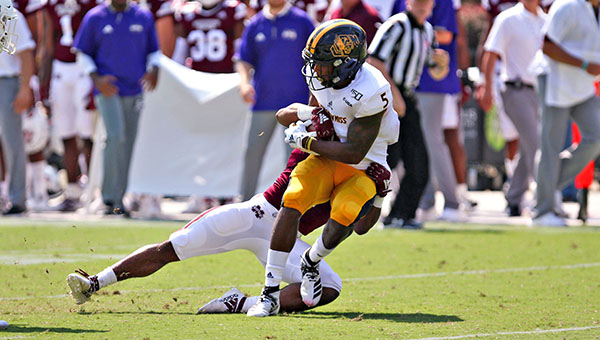 Southern Miss has a chance to reach a major historic milestone on Saturday — a victory over UAB would be the 600th in the program’s history.

The Golden Eagles have a lot more pressing concerns, though.

Southern Miss (5-3, 3-1 Conference USA) enters Saturday’s game at a critical point in the season. A win over the Blazers (6-2, 3-1) would keep alive its C-USA West Division championship hopes and make it bowl-eligible for the sixth consecutive season.

“We are now starting our third season and it is the most important part since you have to finish strong in football,” Southern Miss head coach Jay Hopson said. “November is a critical month for us and our guys understand that we have four tough challenges, and we know that the only one that matters right now is the first one.”

A win would make Southern Miss bowl-eligible with three games remaining and would be a major achievement, Hopson said. Southern Miss played in bowl games in each of Hopson’s first two seasons, then finished 6-5 and was snubbed for a bowl bid last year.

“Anytime you are playing a game for bowl eligibility it is important, it is very important. You just have to concentrate on the next game, though,” Hopson said. “We will count these poker chips up at the end, we have to handle it week to week but I think that is certainly an incentive each and every week to play for.”

The next game is against a UAB team playing for a lot of the same things as Southern Miss.

The Blazers are already bowl-eligible after winning six of their first seven games, but are also a game behind Louisiana Tech (7-1, 4-0) for the Conference USA West Division lead.

UAB plays Louisiana Tech in two weeks in Birmingham and thus controls its path to reaching the C-USA championship game for the second year in a row. Southern Miss has already lost to Louisiana Tech.

“I think that’s what our goal was early on. Somebody asked where we would hope to be at this point. I think knowing all the people we had to replace early on and how we’ve fared to get bowl eligible, we obviously want to go into the last game having every opportunity,” UAB coach Bill Clark said. “This is what we’ve worked for. Having our own destiny in our hands with a chance to go back. Each game is going to be important, so we’re not going to look ahead. This one is going to be huge.”

UAB has dominated the series with Southern Miss in recent years. It has won seven of the last eight meetings since 2009, including the last four in Hattiesburg.

In the last three matchups at M.M. Roberts Stadium, UAB has had a running back rush for more than 200 yards.

Clark said Southern Miss is one of UAB’s biggest rivals, even though it’s a recent series. UAB did not start its football program until 1996, and the teams first played in 2000. UAB joined Conference USA in 1999.

“I think if you go back in history, Southern Miss was getting all kinds of Alabama guys in their past. That really created this rivalry game,” Clark said. “Maybe they don’t have as many Alabama guys as they used to, but I think our proximity and being together in the conference for a long time are big. It’s just somebody that you’re going to see every year, which breeds rivalry.”