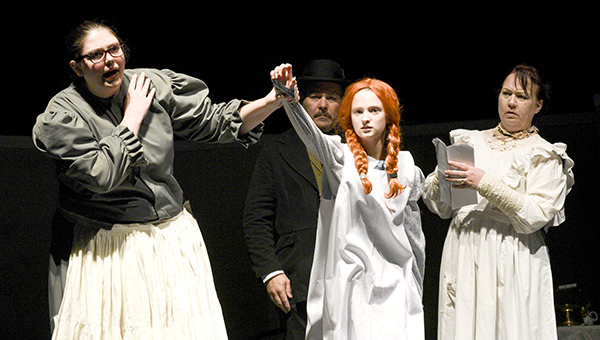 A 15-year-old girl brings humor to the stage in the Vicksburg Theater Guild’s upcoming production of “Anne of Green Gables,” which opened Friday at the Parkside Playhouse Theatre.

Set at Green Gables, the home and farm of Matthew Cuthbert, played by Steven Lloyd, and Matthew’s sister, Marilla, played by Sarah Goss, middle-aged siblings agree to adopt a boy to help them pick up some of the heavy load on their farm. By mistake, they are sent a teenage girl, Anne Shirley.

“She is only 15, and when I chose the show. I just knew she was perfect for the part,” director Bobby Newell said.

During the play Anne ends up touching Matthew’s heart with her creative imagination, Newell said, while still working on Marilla’s stern personality.

“Although she is constantly talking and getting into trouble, the siblings eventually fall in love with Anne’s great personality and creative imagination,” Newell said, of the young woman who is always looking for three things in life — love, family, and a home.

Anne finds those things she is looking for at Green Gables, but not without experiencing tragedy along the way.

“Anne of Green Gables” is an adaption of the novel by the same name, which was written by L.M. Montgomery in 1908. There are also versions of the novel that have been made into movies and musicals.

Set in the late 19th century on a small farm in Nova Scotia, Canada, the play is quite humorous.

“Anne has a lot of funny lines,” Newell said.

Newell said the cast is “tremendously talented” and has worked for months to bring the story to life.

“The play features 16 cast members who range in age from 9 to 67,” he said. “I really like that aspect of the show because it includes school-age kids while still having adults.”

Because of the range of the actors’ age, the show appeals to all ages, which is one of the reasons Newell said he chose the play.

“It includes children and has strong family values. It is all-around a family-friendly show,” he said.

Although the setting is a farm, most of the scenes take place in the home and schoolhouse.

“We brought the set to life by mimicking the Victorian era with furnishings and colors,” Newell said.

This article was written by Ann Wallace DeRossette, who is a senior at Warren Central High School.