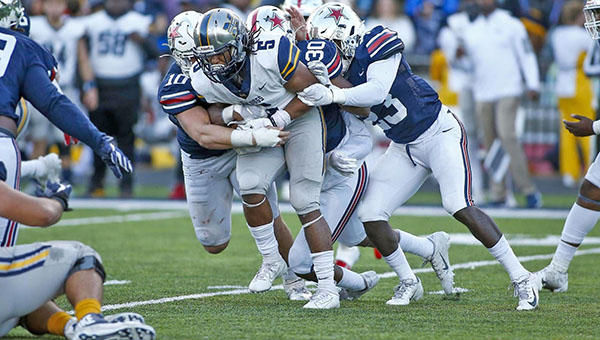 Northwest Mississippi defenders Quentin Wilfawn (10), Tyren Irby (30) and Micheal Campbell (23) team up on a tackle of Mississippi Gulf Coast’s Austin Bolton in the second half of the MACJC championship game on Saturday. (JucoWeekly.org)

SENATOBIA — It was hardly a long drought by historical standards, but for a proud program that hadn’t won one in nearly a decade it was still sweet relief.

It’s the 16th state championship for Gulf Coast, and the first since 2010.

Top-ranked Gulf Coast (11-0) also earned a spot in the NJCAA national championship game on Dec. 5. Its opponent has yet to be determined.

“This is all about all the hard work we put in,” said Gulf Coast quarterback Chance Lovertich, who completed 25 of 37 passes for 213 yards and two touchdowns. “The countless hours in the summer. There’s no telling how many times we ran routes against air. Everything. This means everything to our team right here.”

No. 4 Northwest Mississippi (8-3) led three times in the game as quarterback Jack Walker threw two touchdown passes and Jaquerrious Williams ran for 63 yards and a touchdown.

Gulf Coast answered each time, though. Loveritch threw two touchdown passes to Jymetre Hester to tie the game at 7 and then give the Bulldogs a 14-13 lead.

After Walker’s 8-yard TD pass to Braden Smith put Northwest back in front, 19-14, late in the third quarter, Bolton capped a big day with his 30-yard TD run. Hester caught the two-point conversion pass to give Gulf Coast a 22-19 lead.

Bolton carried the ball 23 times for 117 yards and the one touchdown. Hester caught six passes for 63 yards and two TDs.

Northwest’s last three possessions ended in two punts and a turnover on downs with 1:23 remaining.

Northwest was held to just 53 rushing yards for the game.