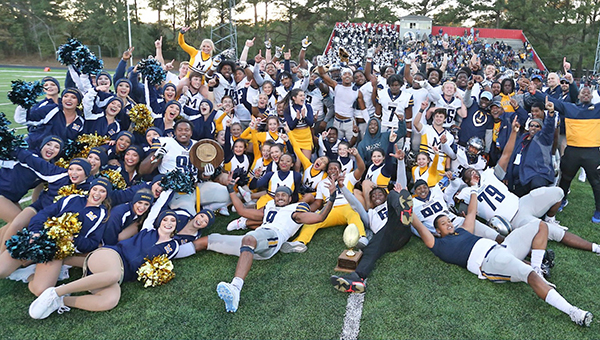 PERKINSTON — After winning the 16th state championship in school history, Mississippi Gulf Coast Community College is turning its attention to a bigger prize.

The game will be played Dec. 5 in Pittsburg, Kansas, and will be televised by the CBS Sports Network.

Gulf Coast can become the seventh junior college national champion in nine years from Mississippi. East Mississippi has won five national titles since 2011, and Northwest Mississippi won once in 2015.

Gulf Coast won the MACJC championship for the first time since 2010 by beating No. 4 Northwest Mississippi 22-19 on Saturday.

“It’s a great honor to be in that game, to be considered one of the top two teams in the country in 2019,” Gulf Coast coach Jack Wright said in a school release. “It’s something the whole community can be proud of. I think it’s a great honor for our players who have worked so hard and sacrificed so much to get to this point.”

Lackawanna (10-0), located in Scranton, Pennsylvania, is riding a 22-game winning streak that dates to 2017. It will make its first ever appearance in the national championship game.
Only two national champions since 2003 — Glendale (Ariz.) Community College in 2005 and Iowa Western in 2012 ­— have come from states other than Mississippi, Kansas or Texas.

Mark Duda has been Lackawanna’s head coach since its inception in 1993, and is the NJCAA’s active leader with 188 career victories. The Falcons lead the nation with 28 interceptions and eight defensive touchdowns in 2019.

“This is the final step for a program that has worked so hard for so long,” Duda said in a release. “Our program has consistently gotten better over the last 27 years. Slowly but surely we’ve gained credibility.”