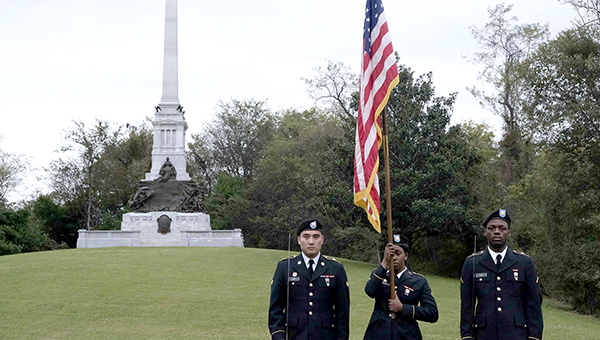 Monday afternoon, one day short of the 110th anniversary of its original dedication, a small group of Vicksburg residents and Vicksburg National Military Park officials gathered at the park’s Mississippi Monument for a rededication.

The ceremony came in the wake of an extensive $75,000 restoration project funded by the state of Mississippi and championed by Friends of Vicksburg National Military Park and Campaign.

“It’s a very appropriate time for us to be doing this,” Vicksburg National Military Park Superintendent Bill Justice said. “A hundred-ten years ago it was dedicated to Mississippi’s Confederate soldiers who served, fought, and in some cases died in the campaign to control the Mississippi River and defend Vicksburg.”

Justice recalled Confederate Brig. Gen. Winfield S. Featherston’s 3rd Brigade, which in May 1863 fought to slow the advance of Union troops at Champion Hill, and the Mississippians of (Brig. Gen. Lloyd) Tilghman’s Brigade, which fought a delaying action on the lower road of Champion Hill.

“I think about how their brave actions allowed the Army of Vicksburg to cross Baker’s Creek and preserve the army,” he said. “I think of the Mississippi soldiers in the Vicksburg defenses, how they repelled the Union assaults and endured a 47-day siege.”

Justice said workers from the National Park Service Historic Preservation Training Center worked on the monument, outlining the work performed by the crew.

He called the memorial “one of the most beautiful monuments in the park.”

Jim Woodrick, deputy state historic preservation officer, said construction of the monument had opposition in the Legislature in 1906 to establishing a Mississippi Monument Commission to build the structure.

“There was opposition from a number of Confederate veterans who were members of the Legislature,” he said. “Their concern was that the state of Mississippi should not spend public monies, to erect a monument on federal property to commemorate a Union Victory.”

The bill, which was championed by former Confederate Lt. Gen. Stephen D. Lee, passed 68-46. The $50,000 appropriation for the commission passed by one vote. Lee would die in 1908, before the monument was dedicated.

When the monument was dedicated, Woodrick said, only the base and the shaft were completed. The bronze work would not be added for another three years.

“This hallowed ground needed to be preserved and dedicated to the critical battle and siege that took place here in Vicksburg, which on one hand was so horrific and deadly, but yet, on the other hand, was used to cement a fragmented nation,” State Sen. Briggs Hopson said.

There were tragedies that led to the need for a battle like Vicksburg to take place, Hopson said.

“Where fellow men and women were treated differently because of their color of their skin, where money and material interests outweighed the good of the nation and good humanity and the need for brother to take up arms against brother and kill one another was difficult and a hard pill to swallow,” he said. “The irony of this war is rich, and the story must be told. It’s good that we have that history and honor that history and recognize the battle that took place here and the sacrifices that took place here on this very place.

“This 110-year-old edifice behind me helps to tell the tale of this great nation and it serves as a reminder of the sacrifices of the forefathers and the peace that ultimately arose from the fields of tragedy.”

At the time, the 76-foot tall monument cost $32,000 (about $912,930 today) and was designed by architect R.H. Hunt of Chattanooga, Tenn., and honored the Mississippi units that participated in the siege.