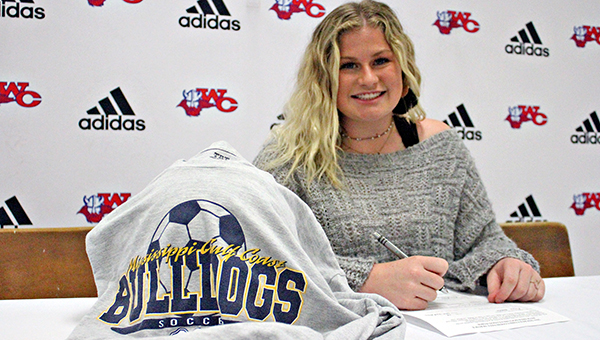 Not long after she could walk, Anna Hoben was running on a soccer field. A few years later, she decided standing in place was better than running and became a goalkeeper.”

“I’ve played goalkeeper since the age I was allowed, since I was 7 or 8. I don’t like running,” she said with a laugh.

A decade later, that decision has paid off nicely.

Hoben, now a senior at Warren Central, on Monday signed a national letter of intent to play soccer at Mississippi Gulf Coast Community College. She and her family and coaches celebrated with a formal ceremony Tuesday morning in Warren Central’s library.

“It feels great. It’s something I’ve worked for my whole life, so for it to finally be here it’s really big for me and my family,” Hoben said. “It’s like you’re finally stepping up to what you’ve worked for your whole life. It’s really rewarding.”

Hoben added that she picked Gulf Coast from a number of college offers because it felt like the right fit.

“Connections. You just walk on the campus and you just know, and that’s what it was for me,” Hoben said. “I had offers from many schools, but it just wasn’t a connection like Gulf Coast. I love the coaches. It was where I was meant to be.”

Hoben has been part of Warren Central’s soccer program since she was in seventh grade, and has been on the varsity team the past four seasons. This is her first as a full-time starter, however.

For the past two years she split time with Layken Stockstill, who was a year ahead and is now playing at the University of North Georgia. Hoben played in 25 games over the past two seasons, but Stockstill was the primary keeper.

Hoben said that while she benefited from the competition, it was a difficult situation to handle at times.

“Most coaches never get two keepers that are so good. It was very hard, because she was the senior and a year above me. She was better in things that I wasn’t, and I was better in things that she wasn’t. So I feel like we both played out very well,” Hoben said. “You play with the cards that you’re dealt. I enjoyed having Layken. She pushed me to do my best, and having someone there to know she’s got my back and I’ve got hers helped.”

While waiting for her chance to be the Lady Vikes’ primary keeper, Hoben made the most of her opportunities. She made 95 saves in her 25 games as a sophomore and junior, and has started this season by allowing only one goal in three games.

“The people who needed to know I could play, they saw it. Which is why I’m here today, and that’s all that matters,” Hoben said.

Warren Central coach Greg Head said Hoben’s intangibles, as much as her skills, have helped her reach an elite status.

“She’s got that work ethic. She’s got that desire. She loves the game. That’s why she’s going to be good at the next level,” Head said.