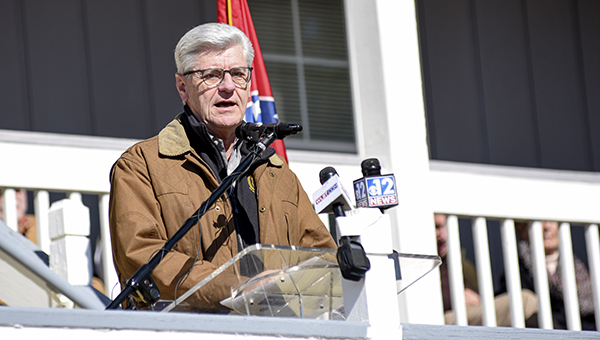 Wednesday morning, 18,000 acres of land — a mixture of bayous, sloughs and stands of hardwoods — came under the protection of the state of Mississippi.

The newly dedicated Phil Bryant Wildlife Management Area is expected to provide state residents an area for hunting, fishing, hiking and the experience of going back through time by entering an area that has been untouched by development.

Recalling the story of President Theodore Roosevelt’s famous refusal to shoot a disabled bear during a hunt in Mississippi, and his own experiences of hunting with his father and brothers, Bryant told the crowd of officials and guests, “We found our way back home today.

“The love of the great outdoors is something that can never be taken from you — the memory of a father and his son, and my uncles, grandfathers, all joining around that campfire on a beautiful evening in the Delta,” he said.

“We found our way to these wonderful woods; this beloved area, the presidents and commoners, of young boys and old men,” he said. “I am so humbled today by this recognition. My desire was to do all I could to preserve a part of Mississippi for those who come after me.”

Bryant said he hopes to return to the area with his grandsons to hunt. “Fix that tent, hunt with my grandchildren, build that fire and tell them stories of their grandfather and his grandfather before him,” he said.

A coalition of the Mississippi Department of Wildlife, Fisheries and Parks, the Nature Conservancy and the U.S. Fish and Wildlife Service through Federal Aid in Wildlife Restoration, purchased the 18,000-acre tract in Issaquena and Warren counties from Anderson-Tully Co. in 2018. It is adjacent to the Mahannah Wildlife Management area.

Lt. Gov.-elect Delbert Hosemann, who was secretary of state when the Anderson-Tully property was acquired, discussed the effort to get the land, adding the process to acquire the property “is the way government and private (business) and non-profits ought to work.”

“Today you’re going to stand on 18,000 acres of which families will build memories, in which people will enjoy themselves, which the state of Mississippi will own in perpetuity,” he said. “I think it’s an honor to have been involved with it on any kind of level.”

After the ceremony, Bryant said the area will also have programs for the disabled to be able to enjoy it.

He said the management area will enable families to keep up the traditions of going into the outdoors to hunt, “particularly the children who now live in apartments or living in neighborhoods and they don’t have the chance if you don’t give it to them.”

“They will be able to come on this and set up with their father, with their uncles; it is a great bonding opportunity and that’s what this land is really meant for, not for the big hunters, the guys who have camps, but for the people who don’t who will come here and will,” Bryant said.

Alex Littlejohn, associate state director for the Nature Conservancy, said the area will provide other opportunities.

“For us, the habitat is so special,” he said. “This is like walking back in time. I put my hand on a cypress tree that I can almost promise you an Indian walked by. That habitat translates into species that migrate through there, maybe waterfowl and others.

“There’s a number of species just for the general wildlife observer; this place is so special,” he said. “You may not want to hunt or fish, but if you want to see a piece of history, an iconic landscape that represents the state of Mississippi, this is it.”