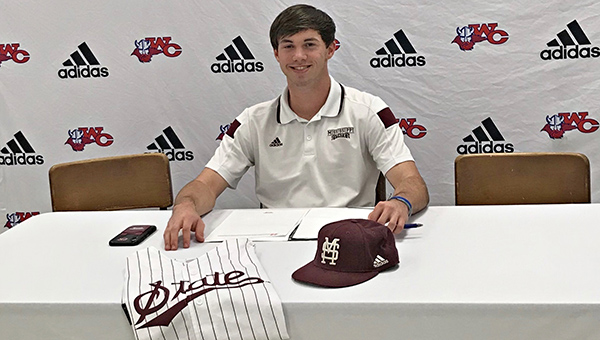 Warren Central baseball player Shane Lewis smiles after signing with Mississippi State on Wednesday. He is the third Warren Central player in three years to sign with a Southeastern Conference school. (Submitted to The Vicksburg Post)

All his life, Shane Lewis watched Mississippi State baseball games and dreamed of one day putting on a Bulldogs uniform and playing in front of a rowdy weekend crowd at Dudy Noble Field.

He’s going to get his chance.

Lewis, a senior infielder at Warren Central, signed a national letter of intent with Mississippi State on Wednesday. He is the third Warren Central player in three years, along with pitchers Aaron Greene (Ole Miss) and Farmer Abendroth (LSU), to sign with a Southeastern Conference school.

“I’ve been a Mississippi State fan all my life. Going to games and seeing the atmosphere, and the coaches, and the program, I’ve always wanted to be a part of it,” Lewis said. “It wasn’t even a thought when they offered. That’s where I wanted to go.”

Lewis said the recruitment process with Mississippi State was quick. He attended one of their high school camps in Starkville, and a couple of weeks later they offered him a scholarship.

“It’s the greatest feeling ever. It’s a dream come true. Now that I have a chance to do it, I’m going to take it and run with it,” Lewis said.

At one point in his high school career, Lewis seemed destined to be a two-sport star. He was a standout quarterback for Warren Central’s ninth-grade football team, then missed the 2017 season with a back injury. He was competing for the starting job in 2018 until a torn ACL ended his season four games in.

The injuries and a realization that he enjoyed baseball more than football led Lewis to give up the gridiron and focus on the diamond.

“It was more of which one I had more passion for, and that was baseball. That day in, day out grind,” Lewis said. “I knew through Mr. David Joseph at Elite Physical Therapy that he would get me back to where I was before. That rehab really helped my mindset. Every day at practice, I just get mentally, physically and emotionally ready for Division I baseball.”

Lewis recovered from his knee injury in time to play for Warren Central last spring. The third baseman hit .323 with three home runs, 19 RBIs and 17 runs scored in 23 games during the 2019 season, and also pitched in 12 games.

Heading into his third season as a starter, Lewis has a .295 career batting average. Warren Central coach Randy Broome said he’s been impressed with the way Lewis has battled through adversity the past two seasons.

“Especially an ACL surgery, it’s not a little fix. There’s a lot of rehab in it and a lot of issues you’ve got to get past,” Broome said. “This is an exciting time for him and his family.”