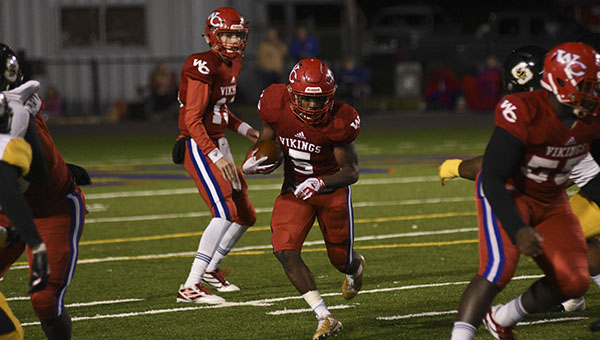 In its last two games, Warren Central has followed a pattern of playing a very competitive first half followed by a not-so-competitive second half. It has been outscored 72-7 in the second half against No. 1 Starkville and No. 2 South Panola.

Head coach Josh Morgan, however, insists it’s not an issue of depth, fatigue, or lack of focus. The problem is just that they’ve played elite teams that responded after being tested early.

“The bottom line is the last two weeks we’ve played two very good teams and we did a good job in the first half just staying in the game,” Morgan said. “We have definitely not helped ourselves, but it’s not a second-half jinx. It’s the other teams.”

The bad news for the Vikings (6-5) is that things don’t get any easier from here on, and they’ve got another very good team up next as they go on the road to play No. 4 Oxford (10-1) in the first round of the MHSAA Class 6A playoffs on Friday night.

Oxford is the sixth opponent that has been ranked in the top five of the Mississippi Associated Press poll when it has played Warren Central. The Vikings are 0-5 so far, although they have been competitive in most of them. They had Brandon on the ropes before letting a fourth-quarter lead slip away and losing 10-9. Then they led Starkville 17-6 at halftime, and only trailed South Panola 7-6 at the half.

Warren Central has also done well recently when it has gone on the road in the playoffs. It won first-round games at South Panola in 2016 and Tupelo in 2017, and held eventual Class 6A champion Horn Lake to its second-lowest point total of the season in a 19-0 loss in 2018.
Focusing on the successes — both this season and the recent past — was crucial to having more of them this week, Morgan said.

“We’ve had some success in those areas. The thing is, the majority of these kids weren’t on those teams,” Morgan said. “The belief factor is important. If you think you’re a four (seed) playing a one, you’re setting yourself up for failure.”

To win, Warren Central will have to be more consistent on offense against a top-tier defense. Oxford is allowing only 10 points per game, and has only allowed one touchdown in its last three games.

“We found ways to have some explosive plays. Against South Panola we had some defensive stands. We have to put it all together and be solid in all three phases, and play a great brand of complementary football,” Morgan said.

Morgan added that an effective running game would be key, especially against a team like Oxford.

The Vikings have six players with more than 100 rushing yards this season, and five of them have scored a touchdown. The committee approach became necessary when senior Jerrious Stovall went down with an injury — he has since left the team — and has been an effective approach when paired with efficient passing by quarterback Parker Kivett and a solid defense that has posted two shutouts this season.

“You look at the running back by committee, and there’s several things that go into it. Those guys give you everything that they have. I think at the same time, our offensive line has gotten better week in and week out. They’re becoming the strength of our offense. And then (offensive coordinator Rob Morgan) does a wonderful job finding ways to be creative running the football,” Josh Morgan said. “You’ve got to be able to hang your hat on something, and whether we can run the ball or not is going to be part of if we’re successful or not.”