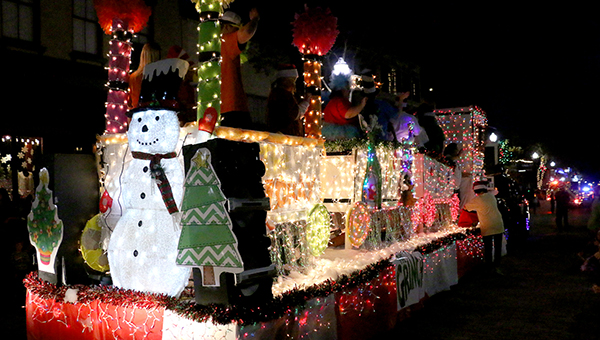 As the sun sets over the Mississippi River and dusk begins to set in, the excitement builds.

Gathered along Washington Street, crowds wait in anticipation hoping to hear the sound of a siren, which means the parade is about to kick off.

On Saturday, Dec. 7, beginning at 5 p.m., the 2019 Vicksburg Christmas Parade of Lights will roll.

Entrants are asked to coordinate their decorations around a particular theme and this year it is entitled “Toyland.”

Kim Hopkins, executive director of the Vicksburg Main Street Program, said there are several considerations when deciding on the theme.

“We play around with a lot of themes and try to make sure all ages can have fun with it, that it is something where participants can be creative and that it has a meaning behind it,” Hopkins said.

To participate, all entrants must be approved and, in an effort to offset some of the expenses of the parade, Hopkins said entry fees will be charged.

For all entries received after this deadline, entry fees are $40 for non-profit organizations and $80 for businesses.

Currently, there are 18 participants registered, Hopkins said, “And we have had several people call in the last couple of days to request an application, so they are starting to come in.”

In years past, Hopkins said, they have had as many as 75 floats participate in the parade, but the average is between 50 and 55.

To maintain the overall effects of the nighttime parade, only vehicles featuring lights displayed will be allowed.

“No trucks, cars, or other means of transportation will be allowed unless lighting effects are created by the participants,” she said.

The only exceptions include cars for dignitaries, pageant winners and walking groups.

Trophies and bragging rights will be awarded for best floats with categories including Best in Show, Best in Business, Best Non-Profit, Best Theme, Most Original, Most Enthusiastic and Most Creative.

The Vicksburg Christmas Parade of Lights is a popular happening in Vicksburg drawing thousands of parade-goers each year.

In addition to parade participants, Hopkins said, the Main Street Board of Directors choose someone to serve as the Grand Marshall.

This year Bill Seratt was selected.

Seratt, who served as the executive director of the Vicksburg Convention and Visitors Bureau, retired earlier this year.

And of course, it wouldn’t be a Christmas parade without Santa.

Jerry Boland and his wife Lynn will once again have the pleasure of being Mr. and Mrs. Claus.

Hopkins said the Christmas parade is her favorite.

“I enjoy seeing the Christmas lights on the floats and how the kids’ eyes light up as all the bright lights pass them by,” she said, as well as the coming together and pride shown from the churches, businesses, schools, bands and everyone who participates. “The Christmas parade is such a fun and joyous parade.”

For more information on the Downtown Vicksburg Christmas Parade of Lights, call 601-634-4527 or email kimh@vicksburg.org.