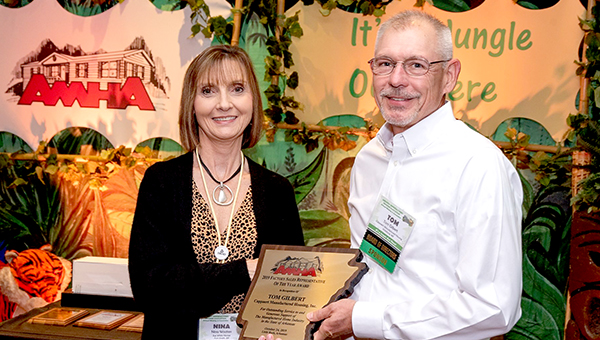 The award was presented as part of the organization’s banquet in October during AMHA’s annual convention in Little Rock.

“The AMHA Achievement Awards recognize companies and individuals which have demonstrated dedicated service and unwavering support to the factory-built housing industry in Arkansas and to those Arkansas families that choose manufactured homes as their source of affordable homeownership,” AMHA Executive Director J.D. Harper said. “Mr. Gilbert and Cappaert Manufactured Housing have shown outstanding support and commitment to the industry and the Association in Arkansas over the past year.”

Gilbert has been involved with the industry for nearly four decades, beginning in retail home sales in 1982.

As a territory manager for Cappaert, Gilbert markets homes to 30 retail accounts in a three-state region, including Arkansas, Louisiana and east Texas.

A native of Minden, La., Gilbert now lives in Vicksburg.

Established in 1967, the Arkansas Manufactured Housing Association is dedicated to the protection and promotion of the state’s manufactured home industry through legislative representation, industry and consumer education, public relations and communications efforts.