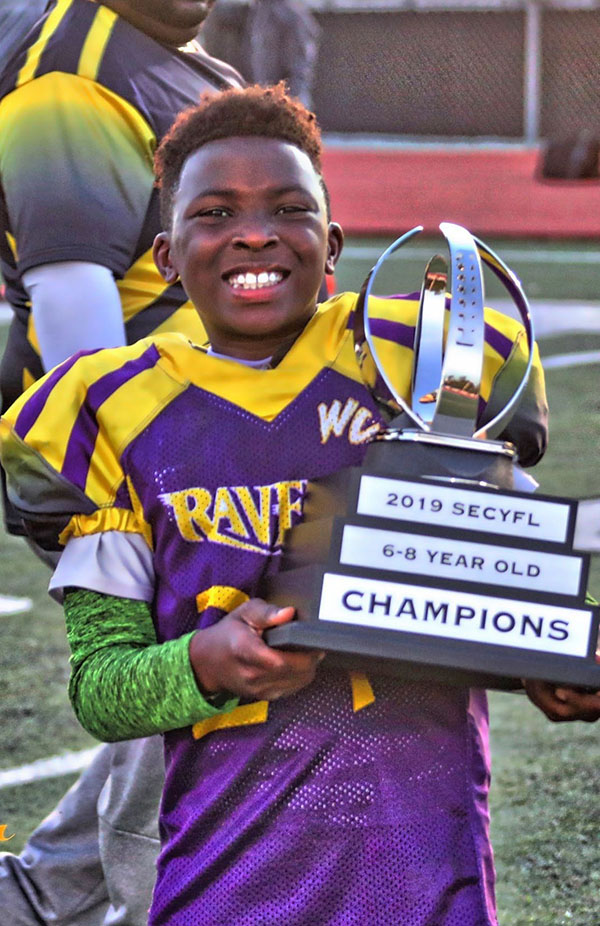 Vicksburg Ravens running back Jordan Taylor holds up the championship trophy after the team won the Southeastern Youth Football Conference championship last weekend. Taylor was the MVP of the state tournament. (Submitted to The Vicksburg Post)

Just before their season started, the Warren County Ravens weren’t sure if they’d have enough players to field a team. They finished it by winning a championship.

The Ravens, a youth football program based in Vicksburg, won the Southeastern Youth Football Conference 8U state championship last weekend in Starkville, while the 12U team finished second.

Ravens coach Harold Knight said it was a great year for the program that was started in 2015 and has now become one of the best in Mississippi.

“We came in and blew it up fast,” Knight said. “Just the effort to keep them all together is hard. Just to attend some of these tournaments are hard. You’re doing fundraisers to get money, some of the kids are less fortunate and don’t have the money. You have to be that father figure to some of them. You’re building confidence and teaching them how to win early.”

The Southeastern Youth Football Conference is the statewide organization tying together four smaller leagues around Mississippi. The champions of those four leagues then play in a state tournament, with this year’s being played in Starkville.

The Ravens play in the Premier Youth Sports League, and both the 8U and 12U teams won its championship to advance to the state tournament.

There, the Ravens’ 8U team outscored its opponents 71-6 in three games to cruise to the title. They beat the Yazoo County Wildcats 30-6 in the championship game.

It was an especially impressive showing considering the Ravens played the entire season with only 12 players on the roster. Led by quarterback Cameron Zellous, running backs Jordan Taylor and Haiden Cosby, and linemen Cole Rogers and Jaiden Jones, the Ravens not only persevered, they dominated.

The team reached the semifinals of the state tournament in 2018 with a 7-3 record, and then went 12-0 and won it all this year.

“It’s tough at that level because you’re teaching a lot of them the basics. Two years ago all of those kids started at 6 years old. We didn’t think anybody was going to be close to them, and they proved it,” Knight said. “As long as you can keep them together they’re amazing. They’ve got great coaches.”

The Ravens’ 8U coaches include Decorey Knight Sr., Vance Gray, Troy Rogers and Jeremy Judge.
The Ravens’ 12U team also won the PYSL championship, but ran out of steam as a wave of injuries washed over them in the state tournament. A half-dozen starters, including quarterback Decorey Knight Jr., had to sit out the championship game as the Ravens lost 27-6 to the Starkville Cowboys.

They finished 9-1 in the regular season and then beat the Bolivar County Falcons 27-6 and the Yazoo County Wildcats 7-0 in the first two rounds of the state tournament.

“That messed up my game plan, because my second-string quarterback Maddox Lynch was also hurt,” Harold Knight said of the injuries. “We had studs. But when we went into that (championship) game we were missing a lot of them.”

Like the 8U team, Knight said the 12U Ravens struggled with numbers and depth. They wound up with 24 players on the roster, although that number was whittled down by the end.

“That’s a great year,” Harold Knight said. “Before we started, we didn’t know if we were going to have enough kids to have a team. I knew it was going to be a special year because we didn’t have Decorey Knight that first game and we still won.”