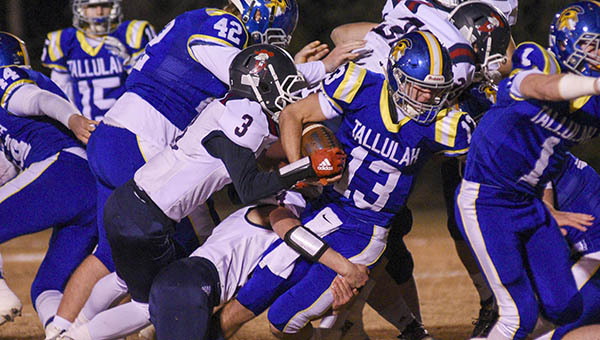 TALLULAH — On the second play of the game Friday night, Tallulah Academy quarterback Carter Thompson sprinted through the middle of Briarfield Academy’s defense for an easy 43-yard touchdown.

It was pretty much the last time the Trojans’ fearsome offense, or their state championship hopes, were ever seen again.

Briarfield quarterback T.J. Baker threw four touchdown passes and ran for 116 yards and another score as the Rebels routed Tallulah 58-20 in the MAIS Class 1A semifinals.

Undrea Spencer scored on a kickoff return and caught six passes for 93 yards and one touchdown for Briarfield. Markaylon Carroway caught four passes for 75 yards and two touchdowns.

Briarfield (11-1) advanced to its second 8-man championship game in three seasons — it won the title in 2017 — and will face Prairie View Academy Thursday at 3 p.m. at Jackson Academy.

Prairie View beat Desoto School 50-48 in the other Class 1A semifinal.

“I went there my freshman year, and I just want to go with my brothers again and win another one Thursday,” said Baker, a junior who has thrown 30 touchdown passes and run for 1,904 yards and 29 TDs this season.

Tallulah (9-2) saw its quest for a fourth 8-man title in five years come to an end. It’s only the second time since the school switched to 8-man football in 2014 that it will not play in the championship game.

“We didn’t show up. I don’t know what else to say. They did and we didn’t,” Tallulah coach Bart Wood said. “We pretty much thought this was the state championship game. These were the two best teams. It’s ridiculous we’re not playing next week, but that’s just the way the bracket fell. It would have been better if it was next week, but I’m pretty sure whoever Briarfield plays, they’ll beat them. And I’m pretty sure whoever we’d have played we’d have beaten them.”

Briarfield’s only loss this season came at the hands of Tallulah, 60-56 back on Sept. 27. Tallulah’s only loss was to Class 2A finalist Manchester the week before that. Coaches and players on both sides viewed this as the “real” Class 1A championship game, but only one team played up to that standard.

After Thompson’s touchdown run got Tallulah fast out of the gate, it was all Briarfield. Starting with Spencer’s 55-yard return touchdown on the ensuing kickoff, the Rebels scored the next 34 points to seize control of the game.

Baker completed 12 of 16 passes for 241 yards. He threw two touchdown passes to Carroway and one to Crews Fortenberry in the first half, then ran for a 54-yard score on the second play of the second half to give the Rebels a 34-6 lead.

By the time Tallulah found the end zone again, on a 3-yard run by Carter Sullivan with two minutes left in the third quarter, it was far too late to spark a comeback.

“The first game, in the second half we just got tired. They were bigger than us,” Baker said. “The second time, we got a chip on our shoulder. The outcome fit the opportunity.”

Tallulah Academy has averaged one touchdown approximately every four offensive snaps over the past four seasons, but struggled Friday. Thompson was 2-of-12 passing — his first eight attempts fell incomplete — and the Trojans managed just 239 yards of total offense.

Thompson did have 82 rushing yards on 18 carries, but more than half of it was on his early touchdown run. Briarfield’s defenders were often in the backfield and rarely missed tackles along the edge, which is one of the most important aspects of defense in 8-man football.

“Our offensive line has dominated all year, and the first half they did not. The second half they did. The first half they didn’t. I don’t know what the deal was,” Wood said. “We knew what it was going to be. When we play like this, it can always get quick one way or the other. Sometimes it just gets away from you. But we’ll be back.”