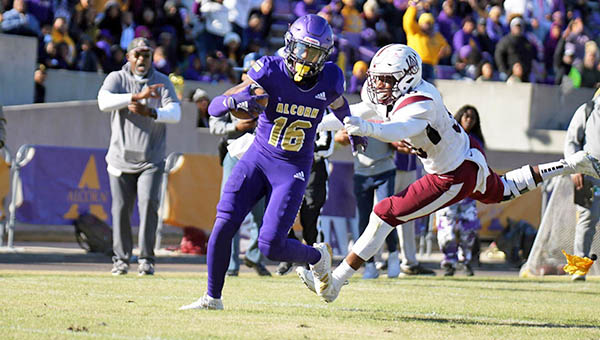 LORMAN (AP) — Alcorn has successfully defended one championship, and now will get an opportunity to go for two.

Alcorn finishes the regular season next Saturday, on the road at Jackson State, and can clinch home field advantage for the championship game with a victory.

The six straight division titles are a SWAC record. Alcorn has won three conference titles during its run, including last season.

“That’s a testament to this whole team and coaching staff the way they came into this season with the attitude of winning a sixth division title,” Alcorn coach Fred McNair said. “It’s something we focused on during the course of camp. We talked about getting back to the Celebration Bowl and the SWAC Championship, this was a stride we needed to make and win the East Division title to get to those points. The team fought hard today and overcame a lot of adversity.”

The 44-yard TD from Harper to Pringle with 11:44 remaining marked the Braves’ second lead of the game. They went up 27-21 when Harper threw a 42-yard TD pass to Raidarious Anderson with 9:27 left in the third.

Alabama A&M had a chance to win it at the end, too. It reached Alcorn’s 14-yard line with four seconds left. The game ended on an illegal touching penalty after the intended receiver stepped out of bounds in the back of the endzone, came back in, and was the first to touch the ball.

“It’s always great to step up in those situations, but as a defense we can’t put ourselves in that situation. We got to take care of business in the first three quarters so it doesn’t get down to the last drive and the last play,” said Alcorn defensive back Juwan Taylor, who had 10 tackles and an interception.

Jordan Bentley for the Bulldogs had 245 yards rushing on 29 carries and scored four times.

Southern U. 40, Jackson State 34
Ladarius Skelton ran for three touchdowns and threw for another score, and Southern University held off Jackson State on Saturday.

Jalon Jones threw for 224 yards and four touchdowns and had 131 yards rushing to lead Jackson State. Keshawn Harper ran for 214 yards on 22 carries.

Jackson State led 24-17 at halftime, but a safety and Skelton’s 22-yard scoring run gave Southern a 26-24 lead. Zach Gleaton kicked a 25-yard field goal for Jackson State, but Southern returned the ensuing kickoff for a touchdown and a 33-27 lead.

Southern is in first place in the SWAC’s West Division and can clinch a spot in the conference championship game by beating Grambling in the annual Bayou Classic game in New Orleans on Nov. 30.

Wright threw first quarter touchdown passes to De’Vante Davis of 27 yards and Dequarius Thomas for 25 yards and the Tigers (6-4, 4-2 SWAC) never looked back.

Grambling outgained the Delta Devils (2-8, 1-5) in total yards 521-134, while the defense had six sacks and had two fumble recoveries.

Mississippi College ran for 232 yards and only threw six passes in the game. Defensive back Derric Hawthorn had 14 tackles and returned a fumble 97 yards for a touchdown late in the third quarter to give the Choctaws a 37-6 lead.

Delta State had won seven in a row against the Choctaws, and still leads the all-time series 22-16-2.

Mississippi College finished the season with its first record of .500 or better since 2009, and was undefeated at home for the first time since 1988.

Howard Payne’s Conner Day returned a fumble 27 yards for a touchdown early in the fourth quarter. The Yellow Jackets’ only offensive points came on a 43-yard field goal by Blake Phipps and a 4-yard pass from Nick Stolt to DunTayviun Gross.

Belhaven quarterback Hunter McEachern was 15-of-34 passing for 216 yards, with no touchdowns and three interceptions. The Blazers (2-8, 2-7 American Southwest Conference) also ran for 201 yards.

Millsaps quarterback Amryn Jeffrey was 13-of-31 passing for 168 yards, with two touchdowns and one interception.

Millsaps lost five of its last seven games after a 3-0 start to the season.