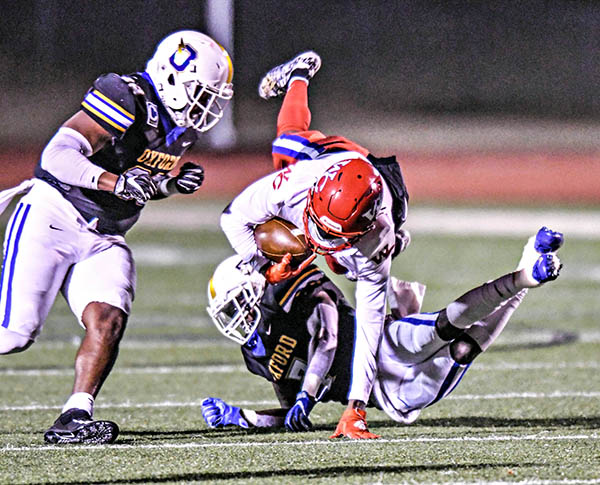 OXFORD — All season long, Warren Central head coach Josh Morgan has talked about the need to play “complementary football” — getting contributions on offense, defense and special teams — in order to be successful.

On Friday night, No. 4 Oxford showed the Vikings how it’s done.

Oxford used several big offensive plays, a couple of field goals and a stifling defense to beat Warren Central 33-14 in the first round of the MHSAA Class 6A playoffs.

Warren Central finished its season with a 6-6 record. It reached the playoffs for the eighth consecutive season, but lost in the first round for the second year in a row.

“We did a good job,” Morgan said of the Vikings’ season. “We were very fortunate to have a chance in the playoffs. We had a lot of adversity and the guys fought. I’m very, very proud of them.”

After Warren Central turned the ball over on downs late in the first quarter, Oxford used a big play to get things rolling.

Running a drag route right to the left, quarterback John Meagher hit tight end J.J. Pegues just seven yards past the line of scrimmage. Pegues ran through one tackler and used his speed to get up the left sideline, galloping 74 yards for the touchdown.

“I saw a touchdown,” Pegues laughed. “Green grass. I just had to get there. Really though, our defense was great. They forced the turnovers and gave us the chance.”
Chargers kicker Jack Tannehill made field goals of 48 and 38 yards in the second quarter, and then Pegues ran for a touchdown to give Oxford a 19-0 lead at halftime.
Meagher scored on a 26-yard run in the third quarter, and Oxford’s defense took it from there.

The Chargers’ defense shut out the Vikings through three quarters, and did not allow them past midfield in the second and third quarters.

Warren Central’s points came late in the game, after it had already fallen behind 33-0. Kentrick Thompson threw to Shayne Ragan for a touchdown on a halfback pass, and quarterback Parker Kivett threw a 71-yard TD pass to Antonio Thomas with less than three minutes to go.

“We didn’t play very good in the first half. They scored on a big play and we had really bad field position the rest of the game. We just didn’t get our footing,” Morgan said. “We liked our match up, and it just wasn’t our night. We had to play our best and we didn’t play our best.”