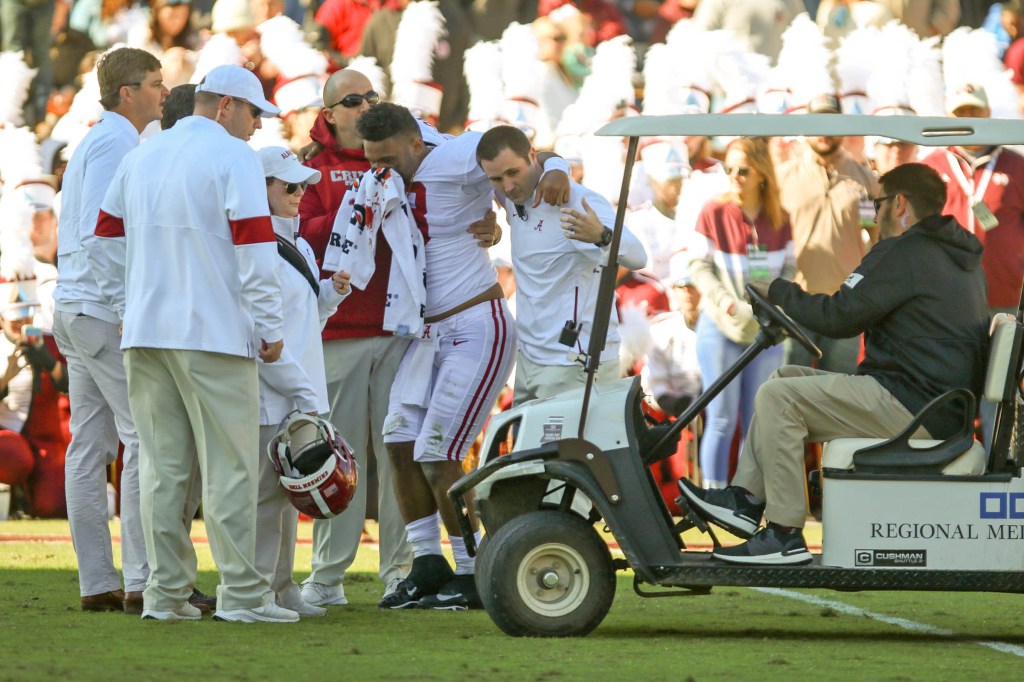 Alabama quarterback Tua Tagovailoa is helped to a cart by trainers late in the first half of Saturday’s game against Mississippi State. Tagovailoa suffered what was reported as a hip injury when he was tackled by two MSU defenders. (Walter Frazier/For The Vicksburg Post)

STARKVILLE (AP) — What was planned to be the last series of the day for Tua Tagovailoa ended in the final play of his season — and maybe his Alabama career.

The Crimson Tide’s star quarterback will miss the rest of the season after dislocating his right hip in the first half of No. 4 Alabama’s 38-7 victory over Mississippi State on Saturday.

Tagovailoa, the potential top pick in April’s NFL draft, was injured while being dragged down by two Bulldogs late in the first half, with the Tide up four touchdowns. He was flown by helicopter to the St. Vincent’s Medical Center in Birmingham, Alabama. Hours later the school announced he has sustained a dislocated right hip.

“He is undergoing further testing to determine the best course of treatment,” Alabama team orthopedic surgeon Lyle Cain said in a statement. “He is expected to make a full recovery but will miss the remainder of the season.”

Tagovailoa had been nursing an ankle injury and Alabama was considering holding him out of this game. The junior needed surgery four weeks ago for a high ankle sprain on his right leg that caused him to miss a game and a half.

Alabama coach Nick Saban said the plan was to remove Tagovailoa from the game before the series when the quarterback was injury. Alabama was leading 35-7, but it was decided to let Tagovailoa play one more possession to get some work in the two-minute drill.

“We can second guess ourselves all we want,” Saban said. “We told Mac (Jones) to warm up and we were going to go 2-minute before the half. Tua wanted to play in the game and so I don’t really make a lot of decisions worrying if a guy is going to get hurt.”

Tagovailoa was 14-of-18 for 256 yards and two touchdowns against Mississippi State, giving him 31 TD passes on the season. He was replaced by Jones, who went 7-for-11 for 94 yards.

Jones led the Crimson Tide to an easy victory when he started against Arkansas last month. Alabama faces Western Carolina next week before finishing the season at No. 13 Auburn.

Tailback Najee Harris warned reporters that he wasn’t in the mood to answer questions, saying: “I’m just hurt about our quarterback, what happened to our quarterback.”

“He means a lot to our team, Harris said. “It’s our guy. I came here at the same time he did. Been friends with him since my freshman season. For him to go down like that really hurts.”

The Crimson Tide (9-1, 6-1 Southeastern Conference) were coming off a 46-41 loss to LSU that nudged it out of College Football Playoff position to fifth in the latest selection committee rankings. Now Alabama is facing the possibility of trying to impress the committee without Tagovailoa, the Heisman Trophy runner-up from last season.

Tagovailoa played well against LSU, passing for more than 400 yards, but he was gimpy at times, favoring his right ankle. Saban said Tagovailoa was a game-time decision against Mississippi State. He started and the Tide jumped out to a 14-0 lead on a touchdown run and a touchdown catch by Najee Harris, who finished with four TDs.

Mississippi State (4-6, 2-5) cut the lead to 14-7 on a 1-yard scoring run by Kylin Hill. But that was as close it got. Harris finished with 88 yards rushing and 51 yards receiving. Jerry Jeudy had seven catches for 114 yards receiving for Alabama.

The Bulldogs’ struggles on offense continued against Alabama. Mississippi State had just 270 yards of offense and 82 passing yards against the Crimson Tide. In the past two meetings with Alabama, the Bulldogs have mustered seven points.

Hill, the SEC’s leading rusher, had 35 yards on 16 carries before leaving the game in the second half with an upper body injury. Mississippi State coach Joe Moorhead said his status would be day-to-day.

Tommy Stevens was 12-of-21 passing for 82 yards for Mississippi State. He did rush for 96 yards on 10 carries.

“We knew against a team of Alabama’s caliber that we needed things to go our way,” Moorhead said. “But spotting them a 14-0 lead three minutes into the game didn’t help. We didn’t execute enough and we didn’t coach well enough to win today.”

The Bulldogs must now win out to be bowl eligible. Their last two games are at home, next Saturday against Abilene Christian and the Egg Bowl vs. Ole Miss on Thanksgiving night.

“We have confidence every week. We went into this game with confidence,” Moorhead said. “Obviously, the kids are down. They should be. Never want to be pleased with a loss, but we’re going to come in tomorrow and watch film. We’ll get better off of it. We’re going to reload and get ready for Abilene Christian. We’ll be 1-0 next week and get up to five (wins).”