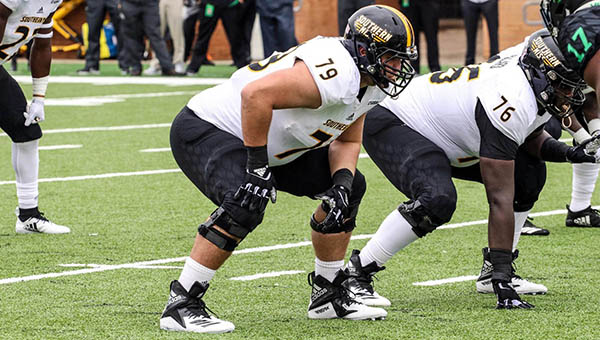 JACKSON — For three years, Drake Dorbeck has been a valuable piece of Southern Miss’ offensive line. On Monday, his status got an upgrade.

The Vicksburg native and former St. Aloysius star was named the winner of the Entergy Kent Hull Trophy as the top college offensive lineman in Mississippi. Dorbeck is the first Southern Miss player to win the award in its six-year history.

The Hull Trophy — named in honor of former Mississippi State and Buffalo Bills center Kent Hull — is presented by the Mississippi Sports Hall of Fame and Museum. Dorbeck will be honored Dec. 3 during the C Spire Conerly Trophy banquet at the Hall of Fame in Jackson.

After helping St. Al reach the MHSAA Class 1A championship game in 2014, Dorbeck signed with Southern Miss and eventually became a stalwart on the Golden Eagles’ line.

The 6-foot-6, 320-pound senior missed three games early in the 2017 season with an arm injury, but has started 30 in a row since then at right and left tackle.

Dorbeck has played in 36 games total in five seasons, including one as a redshirt freshman in 2015. He was also a Conference USA Commissioner’s Honor Roll member in 2016, and  an honorable mention pick on the All-Conference USA football team as a sophomore in 2017.