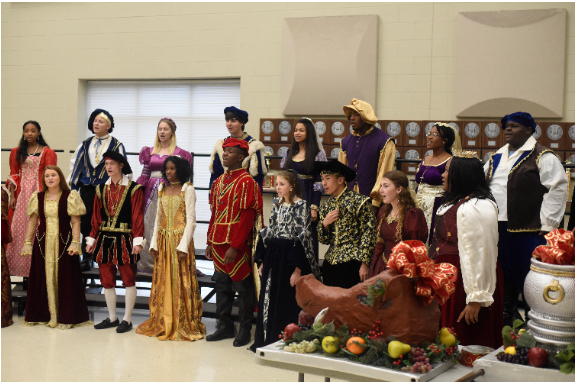 Take a step back in time when kings held court and jesters entertained during the Warren Central High School Singe Feaste.

The event, which is a Renaissance-style dinner theatre with a three-course meal including a Wassail Toast, will be held at 6:30 p.m. with seating at 7, Thursday, Friday and Saturday at the B’nai B’rith Literary Club, 721 Clay St.

During the evening, the WCHS Madrigal Singers, comprised of students who are in 10th through 12th grades, will provide the musical entertainment, WCHS choral director Eric Johnson said.

Students must audition for the choir and as one of the two highest-level choirs offered at WCHS, Johnson said, the group has practiced for the Singe Feaste every day in class since the beginning of the school year.

“We also have after-school rehearsals,” he said. “The students will have logged about 75 hours of rehearsal, not to mention the many hours the students put in outside of class.”

In addition to the hours of rehearsals, the Madrigal Singers are also required to wear Renaissance-style costumes.

“Many of the students have their costumes made by many of our local seamstresses. Some students may purchase costumes online, or they may rent some costumes that WCHS already owns,” Johnson said.

And while there is no particular pattern, to ensure all costumes are true Renaissance-style, Johnson said, they have to be approved by him.

Under the direction of WCHS co-choral director Sam Lovorn, the WCHS Total Sound Show Choir will perform the comedy-style play during the Singe Feaste.

Since his tenure at WCHS, Johnson said the Singe Feaste is a favorite.

“My most special memories of teaching for the past six years are of the two Singe Feastes I’ve had the opportunity to be part of,” Johnson said, “And since it is only every other year, it becomes a high-held tradition for me and the students.”

The Mississippi Boy Choir will also perform during the evening.

Directed by Katherine Hoitt, Johnson said, they are fortunate to have the choir perform several songs during the event.

“I can think of no better way to begin the Holiday season than attending the Singe Feaste,” Johnson said.

Tickets for the Singe Feaste are $25 and may be purchased by calling 601-638-3372. The meal includes Grilled Chicken Piccata, sides, dessert and a Wassail Toast catered by The Anthony.

“Most nights are sold out, so guests are encouraged to purchase tickets fast,” Johnson said.

The Salvation Army’s two major seasonal programs, the Angel Tree and the Red Kettle Drive are underway. “We are already... read more