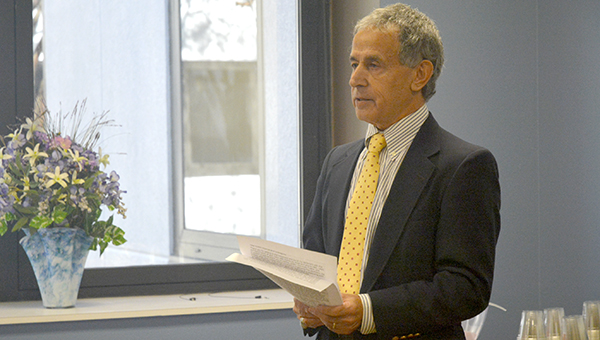 Dr. Zeki Demirbilek talks to co-workers at the U.S. Army Research and Development Center’s Coastal and Hydraulics Laboratory during a reception honoring him on his retirement Friday.

Dr. Zeki Demirbilek came to the then-Waterways Experiment Station 30 years ago, as a research engineer specializing in the topics of ports, harbors and coastal, or littoral, areas and their applications for military and civilian use.

Friday, his fellow employees at the U.S. Army Research and Development Center’s Coastal and Hydraulics Laboratory told him goodbye at a reception recognizing his retirement.

“When I came here, I thought I had finally made it; I asked every one of the staff to tell me about themselves,” said James “Jim” Gutshall, chief, harbors, entrances, and structures branch. “Then Zeki came in and gave me his life story, and I thought, ‘I haven’t done anything.’

“Then as he was leaving, he told me, ‘Oh, I was a professional soccer player.’”

A native of Turkey, Demirbilek played soccer for Manchester United in England. He was spotted playing in France where he was attending school as a teenager and attended the football club’s academy. He suffered a career-ending injury at age 19.

He graduated from the Turkish Naval Academy and later served as a liaison for the Turkish Navy with the U.S. 6th Fleet and then the North Atlantic Treaty Organization.

But he passed over those accomplishments, adding they are totally different from his career at ERDC.

“I always say my past history is not the key thing,” Demirbilek said. “To me, those things are unrelated to what I did here.”

Working at ERDC, he said, is different from being in private business.

Government, he said, works at a different pace and has a different set of rules, urgency and priorities.

“In for-profit, the standards, expectations, requirements, are different. Here (ERDC), researchers study details of a problem — it’s an R and D center, that’s why they can study a problem for years or decades,” he said. “I did not have that luxury in the private sector. The client says, ‘I need this by three weeks or three months or six months;’ the client’s service requirements are different.”

At his reception, several colleagues commended Demirbilek for his help and his service, and some told anecdotes, including one about the shining penny people received for apparent good works.

“I am truly thankful from the bottom of my heart,” he told the group. “I am really humbled by the kind words in the recognition of my service.”