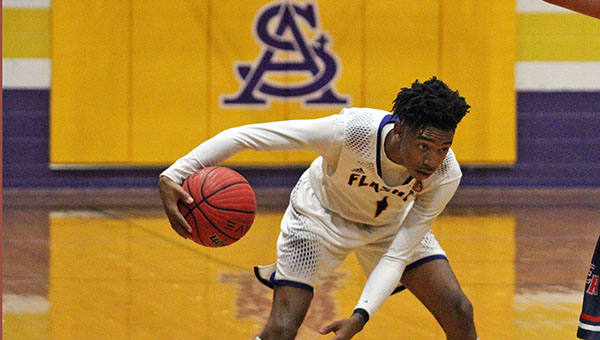 That was the good news. The bad news was they couldn’t take advantage of it.

The Flashes only scored 22 points over the last three quarters after scoring 16 in the first, and watched a 10-point lead gradually fade away. East Rankin overtook them with three late free throws and won 41-38.

“I think my kids played the best defensive game since I’ve been at St. Al,” said St. Al coach Eddie Pickle, who is in his fourth season at the school. “We just missed way too many shots under the basket and had way too many turnovers.”

Trinye Brown led St. Al (1-2) with 10 points, and was the only player from either team to reach double figures. Mike Robinson scored nine points, while Markeese Wilson and Isaiah Thomas had eight apiece.

Late in the fourth quarter, Rials split a pair of free throws with two seconds left to give East rankin a 39-38 lead. A turnover forced St. Al to foul, and White hit two more free throws to make it 41-38.St. Al then missed a 3-pointer at the buzzer that would have sent the game to overtime.

(G) East Rankin 66, St. Aloysius 30
A long scoring drought turned a modest deficit into a big one, and a manageable game into a loss for the St. Aloysius Lady Flashes.

St. Al did not score a point for the first 4 ½ minutes of the second quarter, and did not make a field goal at all in the period. East Rankin went on a 17-0 run in that time to stretch its lead to 24 points at halftime and then cruised to the victory.

In all, St. Al was outscored 29-4 during an eight-minute stretch spanning the first and second quarters.

Johnson finished with 11 points and 11 rebounds as the Gators shot 73 percent from the field and won their second game in a row. They made 36 of 49 shots from the field overall, and 8 of 11 from 3-point range.

Taylon Smith led Vicksburg with 16 points. Peytin Jackson and Lacarius Johnson had 12 each, and Cameron Butler finished with 11 points and five assists. Eleven players scored at least one basket.

Vicksburg will play at Brandon Thursday at 6 p.m.