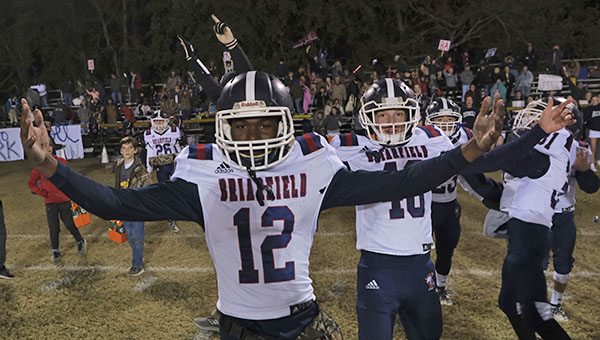 JACKSON — Nobody expected Briarfield Academy to be here.

Without a senior on the roster, maybe 2020 would be the year. Playing in a district that included the defending state champion and two other playoff teams, it wouldn’t have been a shock to see them stumble along the way.

The Rebels heard it all. They digested it all. They ignored it all. And they are here, on the brink of a second state championship in three seasons, with only one more opponent standing in their way.

Briarfield (11-1) will face Prairie View Academy (9-3) in the MAIS Class 1A championship game Thursday at 3 p.m. at Jackson Academy. It’s not just a chance for the program to take its place among the MAIS’ elite 8-Man programs, it’s an opportunity to prove wrong all of the doubters who didn’t think the Rebels would be a contender this season.

“At the beginning of the season I thought about how hard we had to work,” junior wide receiver Undrea Spencer said. “We played with a chip on our shoulder and it gave use the opportunity to be here again.”

Briarfield, located in Lake Providence, La., won the 8-Man championship in 2017 with nine seniors on its 15-man varsity roster. Only three upperclassmen returned from that team in 2018, but a surprising thing happened — rather than starting over from scratch, a strong crop of freshmen stepped into key roles and thrived.

Briarfield finished 8-3 in 2018 and reached the playoffs. Quarterback T.J. Baker emerged as a star, and had a speedy crop of receivers and backs along with him to make plays.

They made another leap this season, losing only once while scoring 54 points per game. Baker has thrown for 1,256 yards and 26 touchdowns, and added 1,788 yards and 28 touchdowns on the ground.

Spencer has caught 20 touchdown passes over the past two seasons, Markaylon Carroway has seven this season, and versatile running back Crews Fortenberry has 628 total yards and seven touchdowns.

“In the last two years we’ve gotten two or three new kids. We were just young,” Briarfield coach Beau Travis said. “The last time (in 2017) we had eight or nine seniors. We probably have more weapons, but these young kids stepped up as leaders. They came together as a team instead of playing as individuals.”

Rather than an excuse, the Rebels have used youth to their advantage in several ways. The absence of seniors — there are none on the roster — allowed the talented junior class to take over as leaders. Baker, Spencer, Carroway, Fortenberry and lineman Jacob Bailey are the only upperclassmen on the team.

It also allowed them to use doubts as fuel. Even after last year’s success, players said, they felt like they were counted out as contenders.

“We feel like we have something to prove. We have a chip on our shoulder to prove that just because we’re young, we can play,” Fortenberry said. “Last time we were here we were the low man on the totem pole. They (seniors) led the way. This time around, it’s different.”

With all of its players coming back in 2020, Briarfield is also in a position to take over as the latest dynasty in MAIS 8-Man football. This is the first season the 8-Man division has been split into two classes, 1A and 2A. The first 11 years of its existence followed a dynastic cycle of teams rising and falling.

Tallulah Academy won three of the last four 8-Man titles and played for another, but was decisively dethroned with a 56-20 loss to Briarfield in the semifinals last week.

So now it’s Briarfield’s turn on top. A win Thursday would be its second title, and it would certainly be a favorite next season to join rival Tallulah with three in four years.

The Rebels aren’t shy about talking about their potential place in history.

“Since we don’t have any seniors, we have a great opportunity to get back here next year — if we stay healthy. That’s the key,” Travis said.

Spencer agreed, and added that the Rebels also realize there’s one big task left before any of that becomes a possibility.

“We’ve got a job to finish Thursday,” he said. “We’re still hungry.”

ONLINE:
• All games will be streamed online at raidernetwork.org