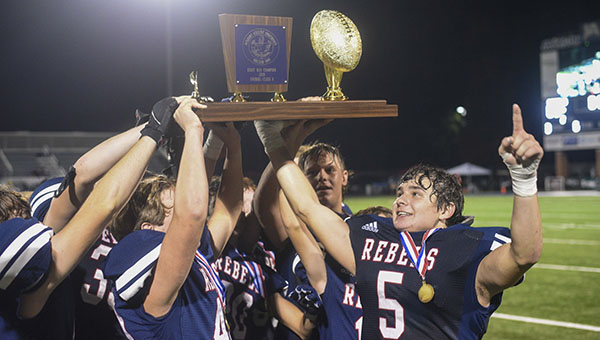 JACKSON — Carter Coullard watched his teammate Nick Hale hit the quarterback, and the ball pop right into his arms with no one between him and the end zone.

“Living the lineman’s dream,” Coullard said with a smile.

Before long, everyone on Briarfield’s sideline was living the dream.

Coullard’s 52-yard fumble return touchdown was one of three that Briarfield scored in a four-minute span in the second quarter. The surge gave the Rebels some needed separation in a tight game, and propelled them to a 60-36 victory over Prairie View Academy in the MAIS Class 1A championship game Thursday afternoon.

It’s the second 8-Man football championship in three seasons for Briarfield (12-1), and perhaps not the last. There are no seniors and only five juniors on this year’s roster. Coullard is one of nine sophomores.

As he adjusted his grip on the heavy championship trophy in his arms, Briarfield coach Beau Travis said he wanted to enjoy this one for a moment before thinking about the future.

“You can say dynasties, this and that, but you’ve just got to take it one year at a time,” Travis said. “You never know what’s going to happen. When you’ve got basically 13, 14 kids playing, if one person goes down that’s a difference maker. Especially with the athletes we have. We’re going to go into this offseason and try to get bigger and stronger and faster, and try to play again next year.”

Briarfield routed Prairie View 78-30 during the regular season and, even though this one ended with a similarly lopsided score, it didn’t quite start that way.

A 4-yard touchdown run by Prairie View quarterback Jacob Farrar with 7:07 left in the second quarter tied the game at 14, and Briarfield was pinned back at its own 12-yard line on the ensuing kickoff.

Four plays later, the Rebels had the lead for good.

On Prairie View’s next drive, Hale came unblocked off the left side and sacked Farrar near midfield. The hit jarred the ball loose and right into the hands of Coullard, who ran untouched to the end zone.

Briarfield’s defense came up with another turnover on the next possession. Baker intercepted a pass from Farrar at midfield and returned it to the Spartans’ 35. Two plays later he ran 17 yards for a touchdown that gave the Rebels a 38-14 lead with 1:11 remaining.

Briarfield scored again on the other side of halftime, on a 25-yard run by Baker, to make it 46-14.

Although it was the second touchdown of four in a row, Travis said the fumble return was the most critical.

Prairie View (9-4) did not go away quietly. Farrar threw two touchdown passes and ran for another in the second half, and finished the game 12-of-24 passing for 258 yards and three touchdowns. He also ran for 86 yards and two TDs.

Briarfield, however, stayed a step ahead. It had five consecutive possessions from the second quarter through the fourth —all ending in touchdowns — where the offense did not even face a third down.

Baker was 7-of-13 passing for 137 yards and one touchdown, and added 161 yards and three TDs on the ground. Crews Fortenberry ran for 145 yards and two touchdowns on only 11 carries, and also caught a touchdown pass.

In all, the Rebels had 360 rushing yards and 497 yards of total offense. They joined Calvary Christian in 2009 and Sharkey-Issaquena Academy in 2014 as the only teams to score 60 points or more in an 8-Man championship game.

Or the Rebels as a whole. They improved their record to 32-5 over the past three seasons, with two championships — and they’ve got their eyes on more.

“I’m only a sophomore, so hoping I can win it two more times,” Coullard said.

Baker, who was a freshman backup for Briarfield’s first championship in 2017, said he’s ready to do it all again next year.

“I wanted to come out here and get another ‘W,’ win a state championship with my brothers, and I just got one,” Baker said. “I plan on getting another one next year, but we’ve got to work as hard as we did this year.”