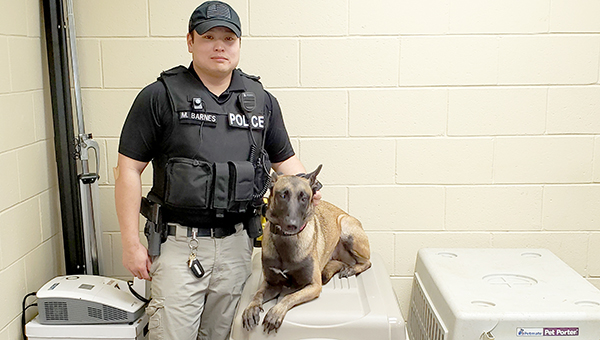 Officer Matthew Barnes and K-9 officer Nadia are pictured with the department’s two kennels available as a holding area inside the Vicksburg Police Department for the K-9 officers. (John Surratt/The Vicksburg Post)

When the Vicksburg Police Department’s three K-9 officers are on duty with their handlers, the dogs now have a place inside the station where they can stay while their human counterparts handle office duties.

Two kennels sit in the department’s narcotics division, providing officers a place to safely keep their K-9 partners when they are out of their cars and filing reports or in meetings.

The kennels are part of the police department’s revised policies for the K-9 officers in response to the death of K-9 officer Thor, who died Sept. 4.

Under the new policy, a K-9 cannot be left in a vehicle for more than 30 minutes except under extreme circumstances, and no K-9 can be routinely carried in a vehicle that does not have a heat sensor and alarm in it that must be tested weekly.

If the handler knows he will be in the police station for more than 30 minutes, the dog must be brought in and placed in a kennel. The officers and their K-9 partners have access to the kennels 24 hours a day, allowing them to keep the dogs safe when they’re off the road while on duty.

“I’m in the office a lot,” said investigator and narcotics investigator Donnie Heggins, who serves with K-9 officer Kilo. “I have an office in here, and I do a lot of narcotics case files. “Having to be able to bring her in assures me of her safety. I don’t have to rely on the vehicle to keep her safe; she can be right here with me.”

Heggins said having the kennel in the station also exposes Kilo to more people and helps her get comfortable being around other people.

Officer Matthew Barnes, who serves with K-9 officer Nadia, the department’s newest dog, spends more time on the street on patrol, but said the kennels “help out when I have to do reports, because a lot of times we have to do stuff on the computers.”

Heggins said the reason the kennels are in the narcotics area and not the department’s lineup room where the patrol division’s computer is, is because the lineup room serves as a break room for employees and people may not feel comfortable eating in the presence of the dogs.

The narcotics room, he said, is a more relaxed atmosphere for the dogs.

“They’re constantly on alert so it helps where there’s not a lot of traffic going back and forth,” Heggins said. “It has worked out very well.”

The department’s other K-9 officer is Cezar who works alongside Lt. Leonce Young.