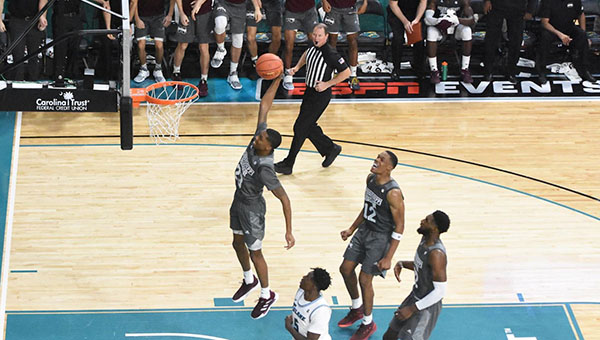 Mississippi State’s Tyson Carter flies in for a dunk during Thursday’s game against Tulane. Carter finished with 16 points and 11 rebounds, and scored his 1,000th career point, as the Bulldogs won 80-66. (Mississippi State Athletics)

Tyson Carter added 16 points and 11 rebounds, Reggie Perry scored 18 points, and the Bulldogs (5-0) shot 61 percent overall and made 13 of 19 shots in the second half.

“We’ve got guys who are capable of shooting,” Carter said, “and tonight was just a good night for Iverson and Reggie Perry.”

Mississippi State never trailed, established a 41-16 rebounding advantage, led by 25 and withstood a late rally to earn a matchup with No. 17 Villanova Friday at 1:30 p.m. in a semifinal game.

“As long as I’ve been coaching, I’ve never been in a situation where the rebound situation was what it was,” Tulane coach Ron Hunter said. “We were absolutely dominated. … You just aren’t going to win many games that way. … It’s just, we had a lot missed shots.”

Christion Thompson and K.J. Lawson each scored 12 points for the Green Wave (3-1). Tulane used a late 16-5 run and pulled to 75-61 on Lawson’s layup with just under 3 minutes left. D.J. Stewart countered with a three-point play with 2:17 to play to put Mississippi State back up by 17.

Corey Tillery had 14 points for Alcorn State (2-4) in the first-ever meeting of the teams. Maurice Howard added 12 points off the bench and Troymain Crosby had seven points and six rebounds in only 13 minutes.

Andrews, a senior forward, hit three 3-pointers and went 7-for-7 from the free throw line in his limited playing time.

The Braves made nine 3-pointers in the first half and led 52-24 at halftime. With a big lead, coach Montez Robinson cleared his bench and gave the starters some rest. Twelve Alcorn players scored and 14 got on the floor for at least five minutes.

Alcorn State takes on Arkansas-Little Rock on the road on Wednesday.