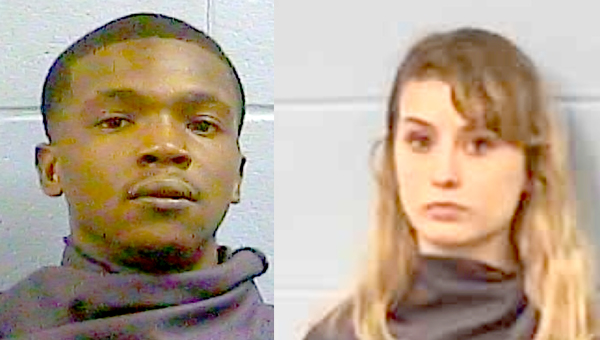 Two people face drug charges after their arrest during a traffic stop Wednesday at Clay and Cherry streets.

DeMichael Jones, 27, and Erin Bowers, 18, both of 303 Hillside Drive, face charges of possession of marijuana and possession of the drug Ecstasy. They were being held without bail in the Madison County Jail pending an initial appearance Friday in Vicksburg Municipal Court.

According to police reports, officers with the police department’s NET Team stopped the car the couple were in because the car did not have a tag. When officers approached the car, they detected the odor of marijuana and investigated. A search of the car revealed less than an ounce of marijuana and 16 Ecstasy tablets.

• Shots were reported fired about 6:51 p.m. Wednesday at the New Main Apartments, 2727 Alcorn Drive. No one was injured and no damage was reported. Officers responding found no evidence of shots fired.

• A coffee pot was reported taken about 2:50 p.m. Wednesday from a car parked at the Vicksburg Convention Center, 1600 Mulberry St.

• Someone reportedly spray painted the lens of a security camera in the parking area of Riverwalk Casino, 1046 Warrenton Road about 2:46 p.m. Wednesday and stole a trailer.

• Three flat-screen TVs, a Mac Pro Book, two “civilian” Dell computers and one “military” Dell computer and an iPad were reported taken from a home about 3:58 p.m. Tuesday in the 300 block of Marian Lane.

• A bag of electronics was reported taken about 9:39 a.m. Tuesday from a storage shed at Red Dot Storage, 3040 Indiana Ave.