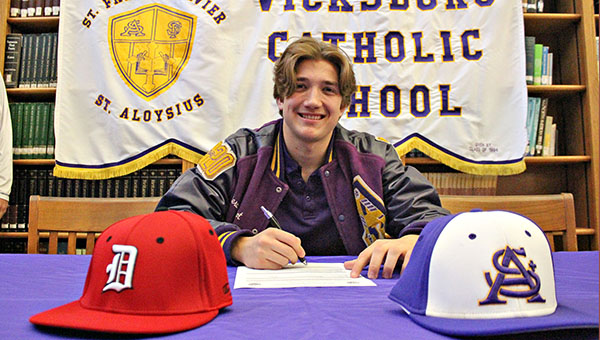 For five years, Kieran Theriot has been among the best players at St. Aloysius in a number of sports.

In football, he was second on the team in tackles this season as well as an excellent punter and kicker. He’s helped the soccer team win back-to-back MAIS state championships by totaling 42 goals and 38 assists the past two seasons. In baseball, he’s heading into his fifth year as the starting shortstop and hit .306 last season.

Theriot was good enough in all three sports that he probably could have played in college in any of them. When it came time to set his path, however, the decision was easy.

“It’s always been baseball. Baseball has always been my No. 1,” Theriot said. “I used to joke with my mom because I’d say I love baseball because it’s the hardest one.”
On Wednesday, Theriot made it official. He signed a baseball scholarship with Mississippi Delta Community College, and will head there next summer after one more soccer and baseball season at St. Al.

Theriot also had a scholarship offer from Copiah-Lincoln Community College to play soccer, and was promised a spot on the baseball team, but said baseball and Mississippi Delta was a better fit.

“It’s awesome. I’ve been dreaming about this my whole life,” Theriot said. “It’s just the right fit for me. It’s a hard-working program, and the coach is going to get me where he needs to get me.”

Theriot broke into St. Al’s starting lineup as an eighth-grader and has remained there ever since. He hit .411 as a sophomore in 2018, and .306 last season. St. Al coach Sid Naron said Theriot’s contributions have gone well beyond the stat sheet, however, and will be felt on the college as well as high school level.

“Starting as a freshman, he played at a different level. He played with a motor. That’s the reason coaches have taken note of him, is the way he plays the game,” Naron said. “You don’t get those around too often, that really understand the game and are baseball savvy enough to be able to start as an eighth-grader and have the leadership skills he has. I think you’ll hear a lot more from him even after Mississippi Delta.”