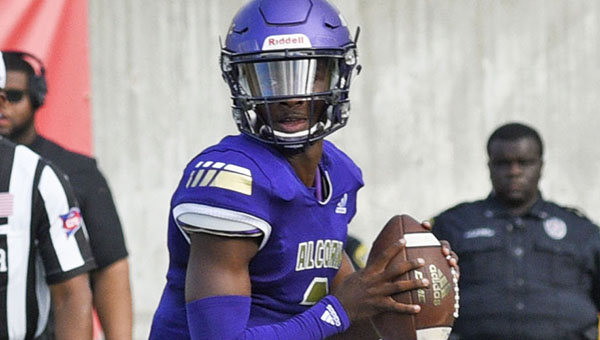 It’s late November, which means Alcorn State has clinched another SWAC East Division championship and is starting to turn its attention toward winning the conference and black national championships.

Before that, however, there is one important and nagging piece of business to take care of.
Alcorn (7-3, 5-1 Southwestern Athletic Conference) will finish the regular season Saturday with the annual “Soul Bowl” rivalry game against Jackson State (4-7, 3-3) in Jackson.

It’s a game the Braves are favored in, but also one that has given them some trouble during the first five years of their continuing reign as division champs.

Alcorn has scored a total of 17 points in its last two trips to Veterans Memorial Stadium, and has lost two of the last five meetings.

Some of JSU’s success might have stemmed from a lull in the schedule. Alcorn has usually wrapped up the SWAC East Division title by this point in the season during the past five years and hasn’t had much else to play for, while Jackson State has had nothing else to play for but beating the Braves.

“If I’ve got to talk to you about getting read for this one, then we don’t have a chance,” JSU coach John Hendrick said at his weekly press conference. “I’ve been a part of a lot of rivalries in my career and this is as good as any of them. It just doesn’t get the national notoriety. Ole Miss and Mississippi State, LSU and Alabama -— it’s as mean as any of them.”

Alcorn clinched the East Division championship last week by beating Alabama A&M 34-28, but still has plenty to play for. A win over Jackson State would give the Braves home field advantage in the SWAC championship game on Dec. 7 against either Southern University or Grambling.

Southern and Grambling play in the Bayou Classic in New Orleans on Nov. 30, with the winner claiming the West Division title.

Alcorn wide receiver LeCharles Pringle said the Braves are trying to focus on one goal at a time.

“We’ve just got to treat it like a regular game,” Pringle said after the win over Alabama A&M. “We can’t go in there with a big head or overthink stuff, we just need to go in there and play our brand of football.”

One of the driving forces behind Alcorn’s sixth division title in a row — a conference record — has been quarterback Felix Harper.

The redshirt junior stepped into the starting lineup in September when Noah Johnson went down with an injury and made the job his own.

Harper has thrown for 2,113 yards and 25 touchdowns, with only five interceptions. He went through a five-game stretch where he did not throw any interceptions.

“It’s a Cinderella story for him this season. Phenomenal player, we don’t have to cut down the playbook for him, he’s very knowledgeable,” Alcorn head coach Fred McNair said. “He had the one pick (against Alabama A&M) which the defensive back made a heck of a play but he’s done a great job the whole season just to become the quarterback he is after backing up and filling in for Noah. He’s a phenomenal kid and he’s always willing to learn.”

If there is a weakness in Harper’s game, it’s that he’s not as much of a runner as Johnson was. Harper has run for only 157 yards on 48 attempts this season. Half of that yardage came last week, when he ran nine times for 79 yards against Alabama A&M.

Other players have picked up the slack — the Braves are averaging 166.3 rushing yards per game — but Hendrick said getting pressure on Harper and limiting his ability to throw the ball would be crucial to the Tigers’ chances of winning Saturday.

“The big thing they do with him is the RPO game, and we have to defend that. He can make the throws, and when a guy can make the throws we have to manufacture pressure because we have not been a great pass rushing team,” Hendrick said. “He’s the difference in that team. The other guy that played is a good runner, but he couldn’t throw like this kid.”