St. Al gets swept by Cathedral 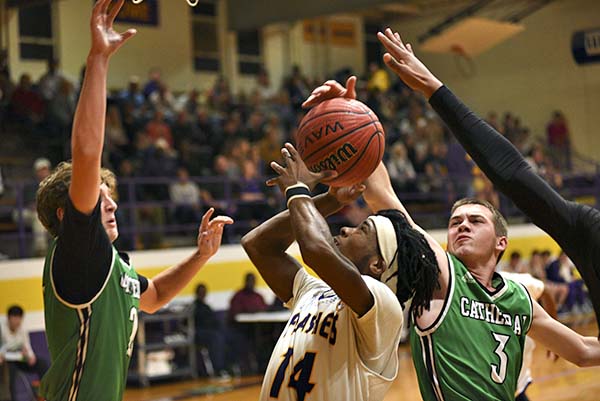 It wasn’t that St. Aloysius was ever really out of Friday’s game against Cathedral. The 10-15-point deficit it faced most of the night could have been quickly erased with one good run.

The problem was that, between turnovers and missed shots, the Flashes never did it.

Cathedral used a big surge and a long scoring drought by St. Al in the first half to gain a lead it never relinquished and beat the Flashes 55-45.

St. Al went six minutes without a field goal in the first and second quarters, and only made one in the last 12 minutes of the half. That allowed Cathedral (2-3) to take a 15-point lead into halftime, and the margin did not get back into single figures until the final 95 seconds.

“We dug a hole. Our defense was not what it should have been. We could not get a shot to fall. When you get four offensive rebounds and get five shots at it, and you still can’t get it to go in the hole three feet from the basket you know it’s going to be a long night,” St. Al coach Eddie Pickle said.

J.C. Harris led Cathedral with 19 points, and J.T. Taylor scored 13 of his 16 points in the first half. Kaden Batieste added 11 points.

The Green Wave snapped a five-game losing streak to its Catholic school rival and beat them for the first time since 2015. Coach Taylor Strahan said his team also did it while playing four freshmen down the stretch because of foul trouble.

“We had one of our senior leaders (Jake Hairston) foul out. He had four fouls for a while and he did good keeping away from the fifth, but he picked that up with four minutes left so we put in another freshman. At one point we had four freshmen on the court with three minutes left,” Strahan said. “Having four freshmen on the court and being able to hold the lead says a lot about them. They’ve got a good future if they keep working.”

Cathedral answered, however, with a small scoring run of its own in the opening minute of the fourth quarter to push the lead back to 16 points. St. Al again chipped away, finally getting it under 10 points on a pair of free throws by Isaiah Thomas with 1:35 remaining and as low as eight on a basket by Mike Robinson with 57 seconds to go. 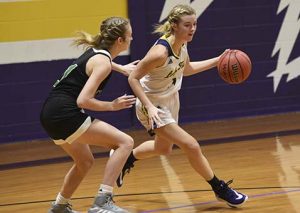 Robinson’s basket cut it to 52-44, but the comeback stopped there. Batieste made two free throws on the next trip up the floor, and St. Al worked the ball around for 20 more seconds on its ensuing possession before missing a shot. The Flashes wound up missing their last four field goal attempts in the final minute of the game.

Robinson finished with eight points for St. Al, all in the second half. Thomas scored 11 and Trinye Brown led the team with 16 — 13 of which came after halftime.

“We got back in it. We cut it under 10. We were down 17 or 18 at one point. I thought we had a chance and we just couldn’t get a shot to fall late,” Pickle said. “I told our guys if we can hold our opponent under 45, we should win. The problem is, we’re not getting the ball in the basket.”

Girls
Cathedral 45, St. Aloysius 34
Cate Drane hit three 3-pointers and went 6-for-6 at the free throw line as Cathedral built a big early lead and then held St. Aloysius at arm’s length in the second half.

Drane finished with 20 points, including 13 in the first half as Cathedral took a 27-15 lead into halftime.

Lauren Dunbar added eight points and Annalyce Riley six for the Green Wave.
Taylor Chewning scored nine of her team-high 10 points in the second half for St. Al (0-5), while Olivia Waring finished with eight points and Marissa Jabour scored five.

St. Al outscored Cathedral 19-18 in the second half.

“We just dug ourselves a hole early. We were down 10-2 to start the game, and it’s no secret that our shooting percentage right now is just horrible. If we get down 8 to 10 points it’s hard to make a comeback,” St. Al coach Mike Coleman said. “Several times we cut it to eight or nine and we’d make three or four straight turnovers and wouldn’t even get shots up.”

St. Al lost its fifth game in a row to start the season. It won’t play again until Dec. 3, when it hosts Tallulah Academy.

“We’re better than we were at the start of the season,” Coleman said. “We’ve just got to take care of the ball a little better. The last game against East Rankin, we had 38 turnovers. When we cut it to eight or nine we’ve got to get shots that we’ve been missing. It’s going to happen one day.”