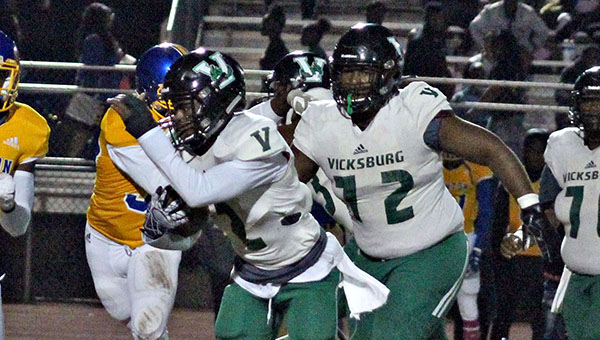 Vicksburg High running back Cedric Phillips (2) runs in front of offensive lineman Michael Montgomery (72). Phillips, who ran for more than 1,200 yards and 10 touchdowns, and Montgomery were both selected to the MHSAA All-Region 2-5A team. (Ernest Bowker/The Vicksburg Post)

The Vicksburg Gators missed the playoffs this season, but hit the mark when it came time to pick the All-Region 2-5A team.

Seven Vicksburg players were selected to either the first or second team, and eight others made the honorable mention list.

Phillips was the first Vicksburg High player to rush for more than 1,000 yards since 2011. He finished with 1,231 yards — the third-best total in Region 2-5A — and 10 touchdowns. He also caught 20 passes for 162 yards and a TD while playing most of the season with a broken finger.

Martin led the Gators with 80 tackles, including six sacks and 14 tackles for loss. He also forced five fumbles.

Taylor played on both the offensive and defensive lines. He finished with 32 tackles, one sack and two forced fumbles.

Montgomery and Blackmore were also two-way players on the line. Sullivan had 60 tackles and a team-high three interceptions.

McCalpin was second on the team with 31 receptions for 398 yards and four touchdowns.