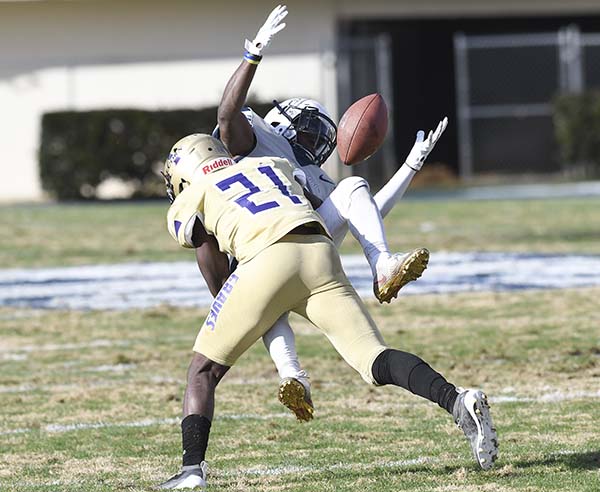 JACKSON — Alcorn State University’s campus is well off the beaten path, a hard turn toward the Mississippi River and six miles down Highway 552 in Claiborne County.

It’s the kind of place you don’t exactly stumble across, unless you’re trying to win the Southwestern Athletic Conference football championship. Then you can’t miss it, and in fact have no choice but to go right through it.

“All week we emphasized the importance of fast starts and getting off to a great beginning,” Alcorn head coach Fred McNair said. “These guys worked hard all week in preparation for this ballgame, so I think they did a great job of executing and putting points on the board. The defense did a great job of almost getting a shutout.”

Alcorn (8-3, 6-1 SWAC) had already clinched the SWAC East Division title, and by beating Jackson State (4-8, 3-4) earned the right to host the conference championship game for the second year in a row. It will face either Southern University or Grambling — whichever team wins next week’s Bayou Classic in New Orleans will also claim the West Division title — on Dec. 7 at Jack Spinks Stadium.

Alcorn has won the East Division championship six consecutive times. It will be playing for its fourth overall SWAC championship in that span, as well as a berth in the Celebration Bowl in Atlanta on Dec. 21 against the MEAC champion, for the black college football national title.

“Any time you’re playing a game at home, it’s always big in front of your home crowd and fans, and all the excitement that comes with it, and getting a chance to sleep in your own bed. That’s the biggest thing. You get a chance to rest and prepare for an extra day since you don’t have to travel,” McNair said.

Alcorn beat Jackson State for the second year in a row, and fourth time in five years. This one was noteworthy, though, for how lopsided it became and how quickly it got that way.
Alcorn had scored a total of 17 points in its last two trips to Veterans Memorial Stadium. It surpassed that number halfway through the second quarter and had a chance to double it by halftime, but a 42-yard field goal by Greg Blue was blocked.

The Braves instead settled for a 31-0 halftime lead. Their final 35-point margin of victory was the largest over their archrival since 1969, when they won 50-8, and the largest by either team since Jackson State won 51-7 in 2011.

“First of all, it was disappointing to have an outcome like that. To get beat like that in a rivalry game was not good,” Jackson State head coach John Hendrick said. “I take responsibility for getting our team ready, and it’s my job to get my team ready. Obviously, I did not do a good enough job preparing them to get ready for this game. We ended up not executing on offense, or on defense or in the kicking game. It was a total, absolute butt-whipping by our rival and we have got to play better than that.”

Despite the big first half, Alcorn started slow. Harper completed just one of his first eight passes, the team’s first possession ended with a punt and the second with a lost fumble.

The third time the Braves got the ball was the charm.

Harper lofted a deep pass down the middle that hit Pringle in stride for a 33-yard touchdown, and the Braves were rolling. Harper and Pringle connected again for a 21-yard TD on their next possession, and a fumble on the ensuing kickoff led to a field goal.

Harper finished the half with touchdown passes of 6 yards to Juan Anthony, Jr., and 14 yards to Chris Blair to make it 31-0 with 3:45 left in the second quarter.

Blair caught five passes for 131 yards and a TD in the first half and added one more short reception in the second half.

“The coaches just told me to settle down. It was just another game on the schedule,” Harper said. “We took it one play at a time, one drive at a time and one quarter at a time. We all executed as a unit to get the job done.”

Jackson State avoided the shutout with a 1-yard touchdown run by Keshawn Harper on the opening drive of the second half, but didn’t do much else. They finished with six rushing yards and 146 yards of total offense. Quarterback Jalon Jones was 7-of-16 passing for 102 yards, with no touchdowns and two interceptions. He was sacked four times.

“I thought we were ready. I thought we would be prepared for this. We had a pretty decent week of preparation. But the tide turned and that Murphy’s Law thing took over on us — whatever could go wrong, went wrong,” Hendrick said. “It started when we fumbled the snap on that field goal and escalated from there. And then we just didn’t perform well. We gave up some things in the passing game on defense, didn’t run the ball well or throw the ball well on offense. We didn’t make first downs. If you don’t make first downs and you don’t stop people on defense, you’re going to have a long, long day, and we had a long day today.”