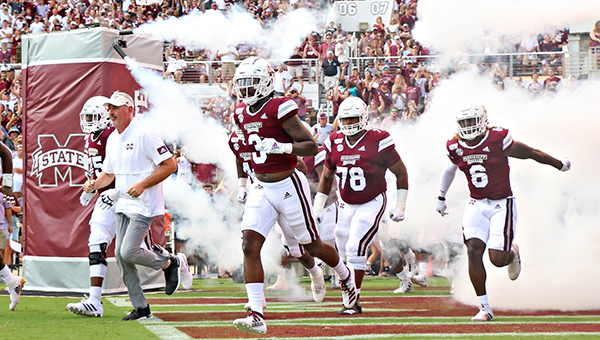 Mississippi State players run out of the tunnel and onto the field at Davis Wade Stadium. The Bulldogs will host Abilene Christian on Saturday night. (Walter Frazier/For The Vicksburg Post)

STARKVILLE (AP) — The good news for Mississippi State is that its last two games appear to be ones it can win.

The bad news is, they are also games it needs to win.

The Bulldogs (4-6) must win their final two games to become eligible for a 10th consecutive bowl appearance. Saturday’s matchup with Football Championship Subdivision program Abilene Christian (5-6) gives Mississippi State an opportunity to sort out its biggest concerns heading into the Egg Bowl showdown with Ole Miss (4-6) on Thanksgiving night.

“I think it goes back to our 1-0 mindset and mentality,” Mississippi State coach Joe Moorhead said. “Regardless of the opponent, we are here competing against a standard and with a process rather than focusing on who you are playing. … Regardless of who you are playing, opponent one or opponent 12, FCS or FBS, we are going to approach it the same way. The process will determine the product on Saturday.”

Mississippi State is attempting to bounce back from a 38-7 loss to No. 5 Alabama in which the Bulldogs trailed 35-0 at halftime.

The Bulldogs produced 270 yards of offense and 82 passing yards. Whether Tommy Stevens or Garrett Shrader is playing quarterback, Mississippi State’s passing game has shown promise at times but not much consistency.

The same can be said for the receivers. In the first six games of the season, leading receiver Osirus Mitchell had 24 catches for 335 yards and four touchdowns. Over the last four games, he has been limited to just two catches for 42 yards and one touchdown.

Moorhead sees Saturday as an opportunity to get the offense, particularly the passing game, back on track.

“We need to get that back clicking, get Osirus going a little bit more, (along with) Deddrick Thomas and Stephen Guidry, and get the quarterbacks to (being) confident,” Moorhead said. “This is a good opportunity run-game and pass-game-wise to work on some of those things in a game setting and get those back to being effective, heading into the last week of the regular season.”

This will mark Abilene Christian’s second game against an FBS opponent this year. The Wildcats opened the season by losing 51-31 to Conference USA’s North Texas.

They’ve lost two in a row in the Southland Conference after winning the previous three. Saturday’s game is their season finale.

“We have to play real good. We can’t turn the football over and have to get some help on special teams — a touchdown or something like that,” Abilene Christian coach Adam Dorrel said. “The big thing for us is to eliminate turnovers against a high caliber team like the Bulldogs.”

The Bulldogs will be without a host of players against Abilene Christian.

The suspended players will miss their eighth game of the season Saturday. Mississippi State will have all of them available for the Egg Bowl.

Hill leads the Southeastern Conference with 1,062 yards and 10 touchdowns. Moorhead expected Hill to practice this week, but his availability for Saturday’s game — especially with a short turnaround before facing Ole Miss — was uncertain.

In all, Moorhead said 10 players have been lost with season-ending injuries.

In the first 10 games of the season, Mississippi State has a played a total of 20 freshmen.

“We held them after practice yesterday and talked about how all the ones who are eligible are activated and certainly the ones that we want to maintain their redshirt, we want to see those guys,” Moorhead said of the freshmen. “The ones who have games available, if the game situation dictates, particularly on special teams, we are going to try to get those guys some game experience.”