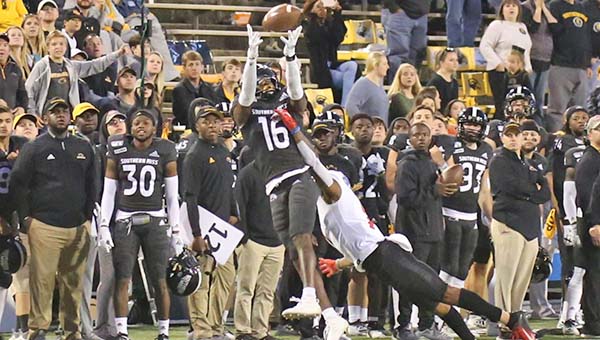 HATTIESBURG (AP) — Southern Miss got the help it needed to have a chance at the Conference USA West Division championship.

It just didn’t do anything to help itself.

Sloan capped the opening drive with a 21-yard TD run and Western Kentucky (7-4, 5-2 Conference USA) led 21-7 at halftime after Storey threw a 64-yard TD pass to Jahcour Pearson and a 21-yarder to Quin Jerringham.

“They got all of the breaks today, we did not get very many. It seemed like every bounce of the ball went against us today,” Southern Miss coach Jay Hopson said. “There were certainly a few plays that kind of swung the pendulum in their favor, but we have to dust if off and get back to work next week. We have a big ballgame that we have to get ready for.”

The Golden Eagles (7-4, 5-2) missed an opportunity to move into sole possession of first place in C-USA’s West Division.

UAB beat Louisiana Tech 20-14 on Saturday to create a three-way tie atop the division between those teams with one game remaining.

Southern Miss finishes the season at Florida Atlantic next Saturday. Louisiana Tech hosts UTSA, and UAB is on the road at North Texas.

“It’s definitely wide open next week,” Southern Miss senior running back DeMichael Harris said. “This week is real vital, and we aren’t just gonna be down in the dumps. We just have to execute a lot better than today.”

Abraham was 16-of-31 passing for 223 yards for the Golden Eagles, with a 60-yard first-quarter TD pass to Tim Jones.

Those milestones and performances didn’t do much to ease the disappointment of a loss on senior day.

“Playing my last game in The Rock, it’s a sour feeling. We just didn’t execute like we should have,” Harris said. The former St. Aloysius star ran for 60 yards on 11 carries. “It was pretty somber. The seniors’ last game here with a loss was tough, but everyone’s looking forward to going back to work next week.”