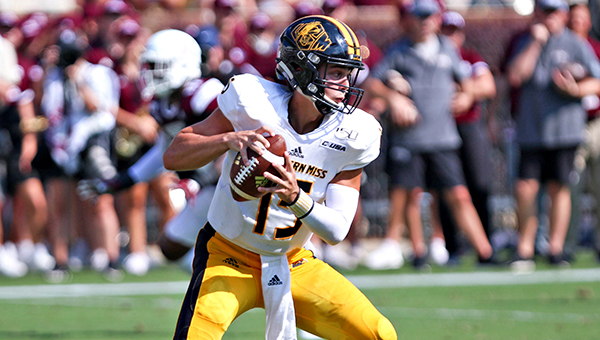 There’s often a kernel of truth in the words, though, as was the case when Hopson discussed USM’s game against Western Kentucky on Saturday.

The Golden Eagles (7-3, 5-1 Conference USA) and Western Kentucky (6-4, 4-2) could both be in first place in C-USA’s West and East Divisions, respectively, by the end of the day, or have their conference championship hopes ended completely. The standings are congested enough that three teams in each division are still alive to play in the C-USA championship game.

With so many moving parts, Hopson said, it’s wise to focus only on those the Golden Eagles can control — namely, beating Western Kentucky and keeping their division title hopes alive.

“We’ll count these poker chips up at the end. Everyone knows where you are, all teams are aware of that, we’re human beings, they see where they’re at, we know it’s a big game, and we have to handle business week-to-week,” Hopson said. “Everybody gets tired of coach-speak, but that’s the way it is, and we’ve got a tough opponent this week.”

When it comes to the West Division, a win over Western Kentucky is only half of the equation that lands Southern Miss in the C-USA championship game.

Louisiana Tech (8-2, 5-1) and UAB (7-3, 4-2) also kick off at 2:30 p.m. Saturday in Birmingham. Southern Miss needs UAB to win that game, and then win its own, to move into sole possession of first place heading into the final week of the regular season.

Louisiana Tech will clinch the division title if it beats UAB.

Southern Miss has already become bowl-eligible, but Hopson said there are far bigger goals in mind.

In the East Division, Western Kentucky is barely alive for the division title. It is a full game behind both Marshall (7-3, 5-1) and Florida Atlantic (7-3, 5-1) and does not own any tiebreaker advantages after losing to both.

The Hilltoppers, then, need to beat Southern Miss on Saturday and Middle Tennessee next week and hope the frontrunners both go 0-2 down the stretch.

Marshall plays Charlotte on Saturday and Florida International next week. Florida Atlantic is on the road at UTSA on Saturday, and then home against Southern Miss next week.

Western Kentucky is coming off a stunning 45-19 rout of Southeastern Conference opponent Arkansas, but coach Tyson Helton said winning a second consecutive road game will not be easy.

“I think they’re probably the most complete team, if you look at them statistically. Leading the league in passing, total offense, they’re up there near the top in defense, they have good kicking specialists. They just make it really hard on you. So, we have to play our best football, and we have a good football team as well,” Helton said. “We have some momentum coming off the big win at Arkansas, we probably played our best team football against Arkansas, and we have to carry that into Southern Miss.”