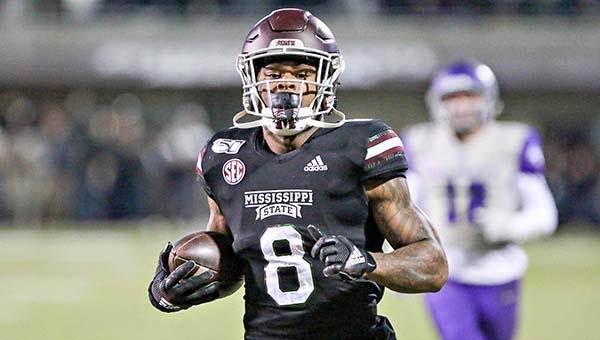 Mississippi State running back Kylin Hill (8) leads the Southeastern Conference in rushing this season, and is one of 10 finalists for the C Spire Conerly Trophy given to the top college football player in Mississippi. (Walter Frazier/For The Vicksburg Post)

JACKSON — Five quarterbacks and the top running back in the Southeastern Conference are among the nominees for the 2019 C Spire Conerly Trophy.

The Mississippi Sports Hall of Fame and Museum announced the semfinalists for the award on Monday. It is given each year to the top college football player in Mississippi.

Each of Mississippi’s 10 football-playing schools is allowed to nominate one player for the award, and quarterbacks headlined this year’s list.

Abraham has thrown for 3,147 yards and 18 touchdowns while leading USM to a 7-4 record.

Harper, a redshirt junior, stepped into the starting job early in the season and guided Alcorn to the SWAC East Division title. He has thrown for 2,387 yards and 29 touchdowns.

The freshman Plumlee has rushed for 989 yards and 11 touchdowns in only eight games for Ole Miss. He has set the school’s freshman rushing record.

McEachern started 38 games in four seasons for Belhaven, and finished with 9,570 passing yards and 75 touchdowns in his career.

Hawthorn only threw 83 passes this season in Mississippi College’s run-oriented offense, but ran for 586 yards and nine touchdowns.

Mississippi State running back Kylin Hill, who leads the SEC with 1,215 rushing yards and 10 touchdowns, is the Bulldogs’ nominee.

The other five nominees came from the defensive side of the ball — defensive backs Junior Faulk of Delta State and Tracy Thompkins of Mississippi Valley State; linebacker Keonte Hampton of Jackson State; and Millsaps defensive end Liam Vincifora.

Faulk set a Delta State record with nine interceptions this season. He had two in a game three times.

Thompkins had 107 tackles for Mississippi Valley State, including 12.5 for loss. He also led the SWAC with three forced fumbles and recovered two.

Hampton finished the season with 106 tackles for Jackson State, including 13 tackles for a loss, and 4.5 sacks.

Vincifora had 14 sacks and 59 tackles in 10 games for Millsaps. He ranked third in Division III in sacks.

This year’s Conerly Trophy ceremony will be held Dec. 3 at 5:30 p.m. at the Country Club of Jackson.

The winner will be determined through a combination of voting by fans and statewide media. The fan vote counts for 10 percent of the total.