Four Down Territory: Alcorn misfires on fourth down; Conference USA is a muddled mess 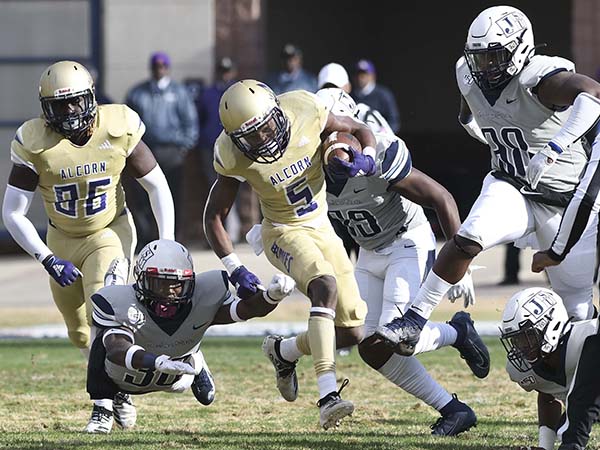 Alcorn State running back Niko Duffey (5) carries the ball Saturday against Jackson State. Alcorn won, 41-6, but failed to convert a fourth down opportunity for the first time this season. (Courtland Wells/The Vicksburg Post)

On a meaningless play late in a blowout win, Alcorn State’s season-long quest for perfection came to an end.

Backup quarterback Jyron Russell ran for six yards on fourth-and-9 midway through the fourth quarter of Saturday’s 41-6 victory over Jackson State. It was the first time this season that Alcorn has failed to convert a fourth down.

Alcorn was the last team in the country — at any level of college football — with a perfect fourth down conversion rate. It had converted a fourth-and-4 in the third quarter to improve to 8-for-8 on the season.

In the fourth quarter, a drive stalled at the Jackson State 26-yard line and head coach Fred McNair elected to go for it on fourth down. Russell, a sophomore seeing his first playing time since Oct. 12, dropped back to pass before breaking out of the pocket and running. He was stopped at the 20-yard line to force a turnover on downs.

McNair expressed some disappointment about having the streak end.

“It’s kind of tough,” McNair said. “Any time you go for it on fourth down you wish that you would get it. But it happens. All games are not perfect. We just have to bounce back and see the mistakes that we made in the course of those fourth down plays.”

Alcorn’s nine fourth down attempts this season are also tied for the third-fewest in the Football Championship Subdivision. Only Northern Iowa (6) and North Carolina A&T (7) have less. James Madison also has 9.

Southern Miss could have made Conference USA’s championship picture simple. Instead, by losing 28-10 to Western Kentucky on Saturday, it turned it into a kaleidoscopic mess.

All five teams still have a viable path to the Conference USA championship game heading into Saturday’s regular-season finale, but four of them need some degree of help because of various tiebreaker scenarios:

• Florida Atlantic can win the East Division by beating Southern Miss, or with a loss by Marshall. If Southern Miss beats FAU, Marshall can clinch the East with a win vs. Florida International.

• Louisiana Tech clinches the West with a win and a UAB loss at North Texas.

• UAB wins the West by beating North Texas, along with a USM loss.

If Southern Miss, Louisiana Tech and UAB end up in a three-way tie in the West at 6-2, it would be decided by the eighth tiebreaker — average computer ranking (Anderson and Hester, Billingsley, Colley Matrix, Massey, Sagarin and Wolfe), with the highest ranked team earning a spot in the Championship.

Head coach Jay Hopson is focusing the Golden Eagles on doing only what they can.

“No, but I’ve heard some good things,” Hopson said of examining the various tiebreaker scenarios. “Bottom line is we just have to win the ball game, that’s all that matters.”

LSU quarterback Joe Burrow continued to author what will likely become the best season ever by a Southeastern Conference quarterback as he led the Tigers to a 56-20 rout of Arkansas.

Burrow has 4,014 passing yards and 41 touchdowns this season, which ranks fourth and third, respectively, on the SEC’s single-season list. He only needs 261 yards to pass Kentucky’s Tim Couch (1998) for the yardage record, and four touchdowns to take the touchdown record from Missouri’s Drew Lock (2017).

Burrow also has a 78.9 percent completion percentage, which is on pace to set an NCAA record.

LSU clinched the SEC West Division championship by beating Arkansas, and has at least three more games remaining — its regular-season finale this Saturday vs. Texas A&M, the SEC championship game against Georgia, and either a bowl or national playoff game.

Burrow was 23-of-28 passing for 327 yards and three touchdowns against Arkansas. He’s the first LSU quarterback to throw for 4,000 yards and 40 touchdowns in a season.

The Tigers also reached another milestone last week. They became the first SEC team to have a 4,000-yard passer, a 1,000-yard rusher (Clyde Edwards-Helaire) and two 1,000-yard receivers (Ja’Marr Chase and Justin Jefferson) in the same season.

Chase has 15 touchdown receptions, which is tied for fourth on the SEC single-season list. He needs four break the record of 18 set by Florida’s Reidel Anthony in 1996.

4
Madison-Ridgeland Academy quarterback Phillip Short threw for 593 yards and five touchdowns to lead the Patriots to a 48-33 win over Jackson Prep in the MAIS Class 6A championship game on Saturday.

It is the first championship since 2004 for MRA (12-2), and ended Jackson Prep’s remarkable run of seven consecutive state titles.

Jackson Prep won 16 consecutive playoff games before Saturday’s loss, which is the second longest in Mississippi high school football history — either the MAIS or MHSAA — since the state playoff system began in 1981.

South Panola and Bassfield are tied for the record with 23 straight playoff wins.
South Panola’s streak started in 2003 and ended with an overtime loss to Meridian in the 2008 MHSAA Class 5A title game. The Tigers then won two more state titles and nine playoff games in a row from 2009-11.

Bassfield won 23 in a row from 2012-16. Bassfield’s streak ended in the 2016 Class 2A semifinals, and the school closed through consolidation at the end of that school year.

Although Jackson Prep won more championships during its streak than South Panola or Bassfield, the difference in their streaks is the road to get there. The MHSAA playoffs include four or five rounds, depending on classification, while the top level of the MAIS that Jackson Prep plays in has three.

The top two teams in MAIS Class 6A — and formerly Class AAAA — also get a bye, which meant that Prep only won more than two games in any postseason during its streak once.

The longest active playoff winning streak now belongs to West Point, which has won 14 in a row and three state championships since 2016.

West Point plays Neshoba Central in the MHSAA Class 5A semifinals this Friday night and can tie Jackson Prep on the all-time list if it wins another state title.