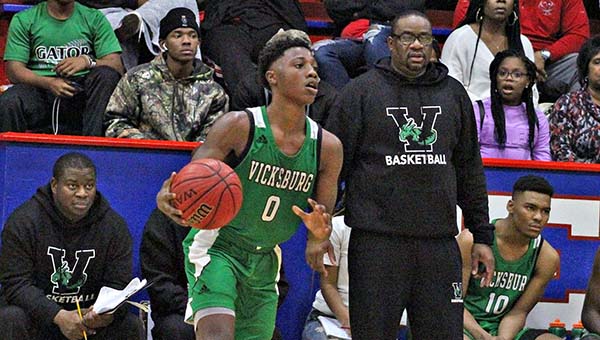 The words coming through the door to Vicksburg High’s dressing room door were muffled, but from the tone the message of the postgame speech was clear — after two double-digit losses to state championship contenders, the Gators need to pick up the pace if they want to be thought of in the same breath.

Keondre Montgomery scored a game-high 25 points, Tre’Voin Bass added 13, and Forest Hill ran away from the Gators in the second half for an 80-58 victory Monday in the River City Challenge at Warren Central.

Forest Hill (6-0) outscored Vicksburg 39-19 over the last 13 minutes to send the Gators (5-3) into the Thanksgiving break on a two-game losing streak. They’ll be back in action on Dec. 3, at home against Northwest Rankin.

“It’ll be a very sour taste to the turkey. But it is what it is. We’ve got to go back to the drawing board. We’ll go practice in the morning and go to work,” VHS coach Kelvin Carter said.

Vicksburg fell behind early, but rallied to get within two points at 41-39 in the opening minutes of the third quarter. Then Montgomery and George Marshall each hit a 3-pointer to key a 12-0 run that gave Forest Hill some breathing room.

Vicksburg chipped away and got the deficit to eight points, 53-45, but Forest Hill finished the third quarter with a 5-0 spurt and was never threatened again.

Marshall’s dunk with 5:59 left in the game capped a 13-3 run, and an eight-minute stretch in which the Patriots outscored Vicksburg 25-9. That run pushed the lead to 66-48, and the Patriots cruised from there.

Cameron Butler led Vicksburg with 22 points, including 13 in the second half. He was a perfect 7-for-7 from the free throw line. Jaden Williams added 10 points for the Gators, and Keshawn Brown scored seven.

“Very disappointed, because we’re a much better team than what we displayed,” Carter said. “A lot of guys have got to do some soul searching and understand that we may be outmanned but you can’t stop hustling. You’ve still got to work hard. You’ve still got to fight. That’s what we’ve got to do. We’ve got to fight until the end. Wins and losses are something of a different nature, but at the same time you’ve got to play hard all the way through.”