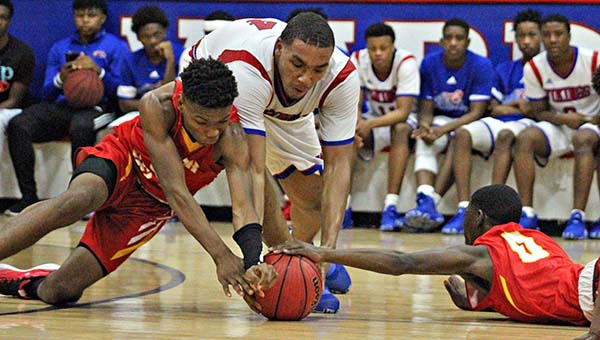 Warren Central missed shots, turned the ball over, and did a lot to try and give the game away to South Delta.

And yet, after all of that, the Vikings were only down seven points.

Warren Central held South Delta scoreless for four minutes in the fourth quarter, and Daniel Smothers scored 11 of his 17 points in the final period as the Vikings rallied to win 61-58 in the last game of the River City Challenge on Monday.

“We played Forest Hill the other day and were down five, and we ended up down 15. So I think we learned a little bit tonight that we can come back,” Warren Central coach Bruce Robinson said.

Warren Central (4-3) won for the third time in four games, and bounced back from a loss to Forest Hill, to head into the Thanksgiving break on a high note. It will have the rest of this week off, and then return to action with three games next week against Wingfield, Jim Hill and Vicksburg.

“We’re 4-3 going into the holiday, and we’ve played as brutal a schedule as anybody’s going to play. It’s a real momentum-booster going into Thanksgiving,” Robinson said. “But we’re going into December now. We’ve got to play a lot better than what we’ve been playing. We‘ve had trouble scoring on layups.”

Monday’s game was the last of seven on a crowded schedule at the Vikings’ own River City Challenge, and tipped off about 8 ½ hours after the first one.

Robinson said the long day might have led to some sluggishness, which showed through the first three quarters. Neither team led by more than four points until South Delta closed the third quarter on an 8-2 run to take a 47-40 lead.

South Delta’s surge was aided by a slew of turnovers and missed shots in the paint by Warren Central.

That ugly few minutes was quickly forgotten, however, as the Vikings put together a run of their own. Smothers hit two free throws and then a basket to cap a 12-3 run that put them ahead 52-50 with just over four minutes remaining.

“I think it was the guys deciding it was time to play,” Robinson said. “They played around for so long, and I think everybody has been out here just about all day so they had to knock that rust off. I think in the fourth quarter we got that knocked off and we figured where we needed to do a few things. And, as bad as we played, we’re still here, so let’s go out and win this ballgame.”

Gentry scored on the next possession to tie it again, but those were the last points South Delta scored until the final seconds. It went four minutes without a point, finally ending the drought when Gentry made a 3-pointer with eight seconds to go. He drilled another one at the buzzer to make the final score 61-58, a result that was much closer on the scoreboard than in reality.

Warren Central wound up outscoring the Bulldogs 21-5 in the first 7 minutes and 52 seconds of the fourth quarter.

“We figured we needed to put their guards in some decision-making situations, so we went to our 1-2-2 press, to where they could make some decisions,” Robinson said. “Our guys kind of got over them and they either had to take a tougher shot or turn it over. That press helped us a lot at the end.”