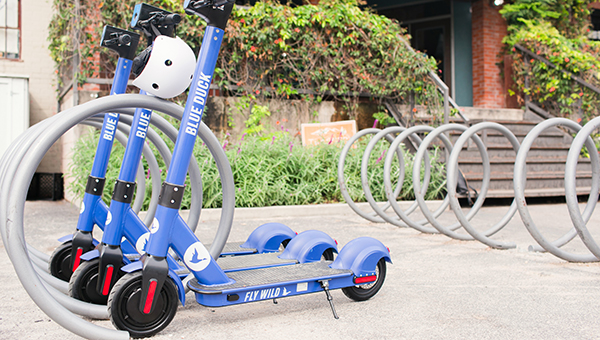 The Board of Mayor and Aldermen are considering a new mode of transportation for downtown Vicksburg — scooters.

The board Monday approved discussions with San Antonio, Texas-based Blue Duck Express that could lead to a pilot program using scooters as alternative transportation downtown.

“This is a trial, and if it works here, we’ll look at expanding it,” said Mayor George Flaggs Jr. He said representatives for Blue Duck were expected to be in Vicksburg within the next few weeks to survey the city for scooter use.

Flaggs said he met with Blue Duck representatives last week while he was in San Antonio for the National League of Cities Convention, and rode one of the scooters while he was attending the conference.

He said some city residents have asked him about getting scooters for the city.

“The younger, older, millennials, and people of all ages just happening to be above 18 years old, have mentioned to me (about scooters) and I think we are in the process of looking at ways of discussing it with a company that is interested in bringing the scooters to Vicksburg in the downtown area,” he said.

Flaggs said the city will not be involved in the scooter business other than the board approving an ordinance allowing scooters to operate.

“They (Blue Duck) are privately owned and operated; we’re not responsible for anything,” he said, adding scooter use would be restricted to certain times of day and certain areas of the city. “They won’t ride on the sidewalk. I’ve heard all (the complaints), I’ve heard about it, but if they can do it in other cities, they can do it in Vicksburg.”

If the board wants to open the city up and make it more progressive, Flaggs said, “You have to do more than dogs and cats to make this city attractive, and I have every intention of doing it.”

Blue Duck, which started operating 18 months ago, specializes in providing scooters to small communities like Vicksburg.

A spokesperson for Blue Duck said the company hires local residents and works in collaboration with the city.

Using the app, the rider scans the scooter to unlock it and rides to their destination, where the scooter is parked.

Payment for use of the scooter can be made by a credit or debit card within the app. Money from the card is deposited into a “wallet” on the app and used to pay for the rides.