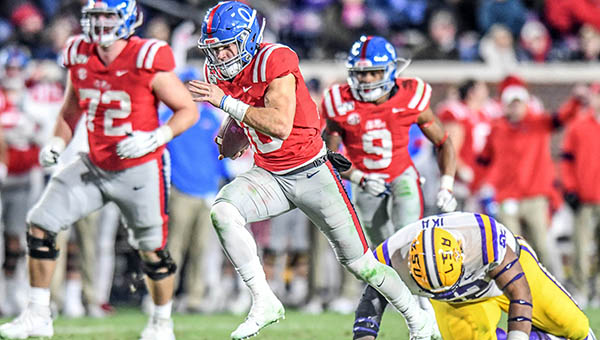 OXFORD (AP) — Ole Miss quarterback John Rhys Plumlee’s running ability has made the freshman one of the Southeastern Conference’s biggest surprises this season.

As Ole Miss (4-7, 2-5 SEC) prepares to close its season Thursday in an Egg Bowl showdown at Mississippi State (5-6, 2-5), Plumlee believes the Rebels’ freshman-laden offense has an extremely bright future.

“The fact that anyone in this offense can make a big play goes to show how special this team can be,” Plumlee said after Ole Miss lost to No. 1 LSU in its last game 11 days ago. “A lot of people look at the record and say we are not good, but we are building something and are very close.”

Plumlee is a major reason for that optimism.

He rushed for 212 yards and four touchdowns in Ole Miss’ 58-37 loss to LSU and became the first quarterback to run for at least 200 yards against a Top 25 team since Texas’ Vince Young did it against Southern California in the Rose Bowl on Jan. 4, 2006.

Including his passing, Plumlee accounted for 335 of the Rebels’ 640 yards against an LSU defense that had been allowing a meager 340.4 total yards and 100.7 rushing yards per game.
It would have been hard to forecast in August that Plumlee would become such a featured performer in Ole Miss’ offense.

The Rebels spent the majority of the offseason anointing redshirt freshman Matt Corral as the face and future of the program. Head coach Matt Luke took Corral to the Southeastern Conference Media Days event. Corral was a cornerstone of Luke’s first signing class in 2018.
Much has changed since.

As soon as Plumlee replaced an injured Corral in the fourth quarter of a Sept. 21 home game against California, the future of Ole Miss’ quarterback situation began to change. With Corral sidelined by a rib injury, Plumlee entered the game and nearly rallied Ole Miss all the way back from a 28-13 deficit. Ole Miss was just shy of the goal line when Cal escaped with a 28-20 victory.

Ole Miss used a two-quarterback system for a couple of weeks, but it eventually became clear which direction the coaching staff preferred to go. The fleet-footed Plumlee is an ideal fit in first-year offensive coordinator Rich Rodriguez’s run-heavy spread attack that uses the quarterback as a focal point of the ground attack.

Plumlee, 6-foot and 192 pounds, has run for 989 yards and 11 touchdowns on 136 carries. He now faces a Mississippi State defense that allows 4.5 yards per carry. Vanderbilt and Arkansas are the only SEC teams giving up more yards per rush.

“He’s a guy who’s got tremendous speed, great escapability, and for a smaller guy, he runs with pretty good physicality too,” Mississippi State coach Joe Moorhead said. “You’ve just got to make sure you swarm and get him down on the ground because he’s made a lot of explosive plays.”

The cause for concern with Plumlee is his passing inaccuracy. He is completing just 51 percent of his throws and has just three touchdown passes. Plumlee hasn’t thrown a touchdown pass since an Oct. 12 loss at Missouri.

But he is making incremental improvements through the air to complement his tantalizing speed. Plumlee was 9-of-16 for 123 yards against LSU, and his 56.3 percent completion rate was his second-highest in his six starts.

Plumlee’s development could be interrupted when he is slated to play baseball for the Rebels, leaving his ability to participate in spring football practice in question. Plumlee’s evolution as a passer will be crucial to the long-term success of Ole Miss’ offense and the football program as a whole.

“I think there are some concerns with the 20-hour rule with things he can do, but I anticipate him being at spring practice and being able to throw some to the receivers,” Luke said. “We’ll see what that looks like, especially with how he fits into the baseball program.”

Luke said he and Ole Miss baseball coach Mike Bianco will sit down and talk about Plumlee’s schedule.

“We will have to make some progress in the offseason because he has a unique skill set,” Luke said of his quarterback, “and the more we can build off that, it makes us a dangerous offense moving forward.”