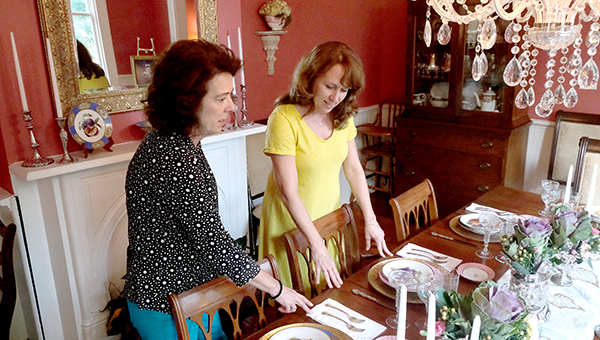 “Our most treasured family heirlooms are our sweet family memories. The past is never dead, it is not even past.”

This is certainly true for Vicksburg resident Mindy Giambrone.

She has many fond memories of Thanksgivings spent with family. To preserve a bit of this past, she and her sister, Rachel Hardy, continue to carry on many traditions, some of which include hosting a formal Thanksgiving get together and using the family china, crystal and silver, that has been passed down from Junius Richard Ward, the sisters’ great-great-grandfather.

“Our earliest memories of Thanksgiving were at our maternal grandmother’s home in Erwin, on Lake Washington,” Mindy said. “We would dress as if we were going to church, and the table in the dining room was always set with the family china, crystal and silver.”

A “children’s table” was also prepared, she said. Both tables had homemade place cards at each setting, which had been made by the youngest members of the family.

“It was usually of our hand creating a turkey,” she said.

Table manners and proper table etiquette were observed during the meal, which included turkey and cornbread dressing, a traditional southern fare.

“But the absolute best part of the Thanksgiving feast was my grandmother Pep’s homemade caramel cake and my Aunt Margaret’s heavenly hash,” Mindy said, adding that although the recipe for the caramel cake is written down, it has yet to be perfected by anyone other than her grandmother.

When the dinner was over the children would play croquet in the yard or ping pong while the adults visited in the rocking chairs and swings on the porch that overlooked the lake.

The tradition of traveling to Erwin continued while Mindy’s grandmother, Preston McNeily Erwin and her aunt, Margaret Erwin Shutt were alive, she said, but eventually the holiday shifted to her parents’, the Rev. Clifton and Percy McInnis, home on Wisteria Drive after the death of her grandmother and when it became too much for her aging aunt and uncle.

But like their times spent at Erwin, Mindy and her sister recalled Thanksgivings being just as fun and formal as when they were little girls.

“Some of our fondest memories of Thanksgiving when it moved to Vicksburg were the preparations. We cooked, steamed napkins, polished the silver, washed the crystal and set the table,” she said. “My father would bring cuttings from the yard for us to make a centerpiece for the tables, and the youngest children or grandchildren would make the handmade place cards.”

A children’s table was also set up, just like times spent at Erwin at their grandmother’s home. And at the McInnis house, there was also always something bubbly in a cooler on the screened-in porch, she added.

With three older brothers, Clif McInnis, (the Rev.)Vic McInnis and Mike McInnis, Mindy said Thanksgiving in Vicksburg was a time for the family to enjoy one another’s company, reminisce about their childhood and laugh.

“There was always so much laughter,” she said.

Five years ago, Mindy and Rachel began alternating Thanksgiving at their homes after the passing of their parents.

“That first year — the five children, spouses and grandchildren were all at a loss — orphaned in a way,” Mindy said.

But as in the past, they still gathered, cooked, polished the family silver, washed the family crystal, set the table with the Ward china, and the youngest grandchildren made place cards, she said.

“We reminisced, we shed a few tears, and we laughed — still so much laughter,” Mindy said. “We feel blessed indeed for those that came before us and those that taught us the importance of family, tradition and thanking God every day for all of our many blessings.”

The family home, which Mindy’ referred to as Erwin, was built on a plantation between 1827 to 1830 by her great-great-grandfather Junius R. Ward. It was used as the family’s winter home, while the summer home, Ward Hall, was located in Georgetown, Ky.

“The history of the house and surrounding farmland was palpable on the visits,” Mindy said, “And after the sunset, we would all pile on my grandmother’s bed and hear about her dear friend, William Alexander Percy, stories about the flood of 1927 and tales of family characters like Salley Ward.”

The china, crystal and silver have been handed down through the family and are still used by Mindy and her sister.

The Paris Honore’ Porcelain hand-painted cabinet plates, which were made during the second quarter of the 19th century, have fruit and flowers in the center of the dishes and are edged with a parcel-gilt bleu royale border.

The china, as well as the crystal stemware and silver, which is Antebellum Tiffany and Co., was made in the mid-19th century in New York. They are all engraved with Ward’s initials, JRW.