Tales from decades of hunting around Vicksburg shared in new book 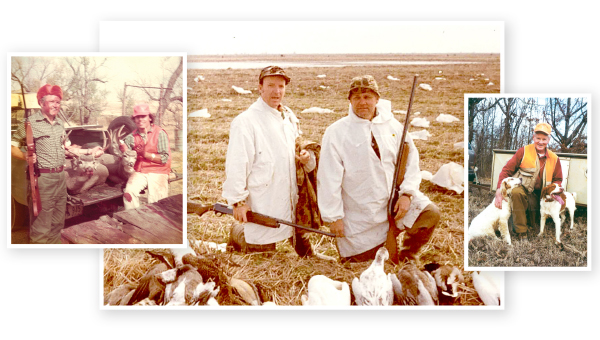 In the mid-20th century, hunting was all around Vicksburg. Every fall hunters flocked to the woods and lakes surrounding the city in their quest for deer, ducks and other game.

It took a long time for John DeCell to join them.

He didn’t head to the woods until he was in high school and didn’t bag his first deer until he was in his early 20s. Thankfully, he still had plenty of time to make loads of memories, which he’s now sharing in his twilight years.

Now approaching his 84th birthday, DeCell collected some of his favorite hunting stories into a self-published book appropriately entitled “Hunting Memories: That’s What Friends Are For.”

The book is a love letter to the outdoors, a trip through hunting culture over the past 60 years, and a simple collection of fun and breezy anecdotes. More than anything, DeCell said, it’s a thank you and remembrance to friends and family he’s hunted with along the way.

“Hunting Memories” is available at Lorelei Books in Vicksburg.

“I didn’t do it driven by dollars. I did it to remember friends,” DeCell said, before adding with a laugh, “I will have to confess I needed some memory help at the ripe old age of 83. Everybody held their breath, but I promised I wouldn’t tell the worst stories.”

DeCell wrote a family genealogy book nearly 30 years ago, but never anything like “Hunting Memories.” Health and age forced him to give up hunting in recent years. So, “retired and bored,” he decided to take on a new project.

The final result was a 59-page book containing 17 bite-sized hunting stories. Each only lasts about two pages, making them a quick and easy read. A number of photographs that not only feature DeCell’s family and friends, but also show the evolution of hunting and equipment over the decades, are also included.

The book goes in chronological order, beginning with DeCell’s earliest forays into the woods and deer camp in the late 1950s, and bagging his first deer in 1957. Other tales include frog gigging, an adventure to hunt elk and mule deer in Wyoming, and bird hunting throughout northern Mississippi and Tennessee.

DeCell moved to Memphis after his discharge from the Air Force in the 1960s and has lived in or near that city ever since.

With hundreds, if not thousands, of stories to choose from, DeCell admitted he wasn’t sure how these 17 made the cut as the most memorable or which was his favorite.

“I can’t tell you one as a favorite. Each one is a little bit different. Like when I was hunting with two or three preachers, I had to behave a little more with them than with my friend Buddy Hallberg,” DeCell said with a laugh. “I hunted so much and I’m sure I left someone out that I hunted with. It’s a great world we live in, and when you can enjoy your surroundings and good friends it makes it enjoyable.”

Although he might not have a single favorite story, DeCell did say he particularly enjoys bird hunting. Ducks, geese, quail and doves have all been targets, and the dogs that retrieve them are remembered as fondly in his book as his two-legged human buddies.

DeCell has owned more than 20 bird dogs in the last 30 years. His last two, a setter named Missy and a Brittany named Bo, are pictured with him on the back cover of “Hunting Memories.” When he retired from hunting, DeCell gave Bo to Ames Plantation in Grand Junction, Tennessee. Ames Plantation is the site of the National Championship Field Trials for bird dogs each February.

DeCell said he still goes to visit Bo every now and then.

“When I get to Heaven, if there is at least one bird dog on the admissions committee then I am guaranteed admission,” DeCell said with a laugh.