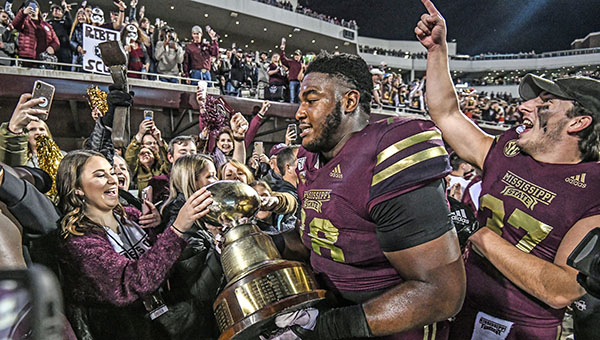 STARKVILLE (AP) — Gee whiz, what a finish this Egg Bowl had.

Luke Logan missed a 35-yard extra point after Ole Miss receiver Elijah Moore was penalized for celebrating a touchdown by crawling and pretending to urinate like a dog, and Mississippi State ended up with a 21-20 victory Thursday night in the 116th Egg Bowl.

“That’s not who we are. We’ve been a disciplined team all year, and so just disappointed that happened,” Ole Miss head coach Matt Luke said. “That’s not who he is. Elijah is a good kid and he just got caught up in the moment.”

The teams combined for seven sacks and 17 tackles for loss, and Mississippi State won the turnover battle 3-1. The Bulldogs’ Erroll Thompson had a game-high 11 tackles, one for a loss, a pass deflection and a forced fumble.

“Erroll’s our team captain, you know, and he has the confidence of the team,” Moorhead said. “For him to play the way he did, and just the entire defense, it was a great team win.”

Mississippi State won its last two games to reach bowl eligibility for the 10th year in a row. Moorhead has often been criticized by fans this season as the Bulldogs have struggled to reach this point.

After the game, Moorhead was fiery in his defense of the job his staff has done with this team, overcoming a litany of academic suspensions and several injuries to key players.

“To me it was an exclamation point on the narrative that I’m not the right man for this job or this team, or that I can’t coach in this league,” Moorhead said. “This is my school, my team, and this is my program. They’ll have to drag my Yankee ass out of here.”

The Bulldogs scored two first-half touchdowns, the first on Nick Gibson’s 27-yard run and the second on the next possession on quarterback Garrett Shrader’s 1-yard run.

Ole Miss responded with two touchdowns of its own, with quarterback John Rhys Plumlee scoring on a 2-yard run and Jerrion Ealy on a 5-yarder to tie it at 14 at the half.

Midway through the third quarter, the Bulldogs sacked Plumlee three times on the same drive, the third forcing a fumble. Seven plays later, Shrader scored on a 5-yard run to put Mississippi State up 21-14.

After pulling Plumlee in favor of Corral, Ole Miss had two different red-zone opportunities in the fourth quarter. The other ended with a Marcus Murphy interception.

On the final drive of the game, Mississippi State committed three of its five total penalties and Ole Miss ran nine plays inside the 15 before eventually connecting for the touchdown.

Unfortunately, Moore then crawled to the back of the end zone on all fours and lifted his leg in celebration. It appeared to be an imitation of a celebration by former Ole Miss receiver D.K. Metcalf in the 2017 Egg Bowl.

Moore was not made available to media after the game, and his teammates said he did not address the team about the situation.

“I didn’t really have a good look at it. Everyone was more excited that we scored a touchdown,” said Plumlee, who was 9-of-14 passing for 121 yards, and added 34 yards and one touchdown rushing. “When you’re excited and you make a big play, you celebrate a little bit. That call just didn’t go our way. …It’s an emotional game and that’s part of it sometimes.”