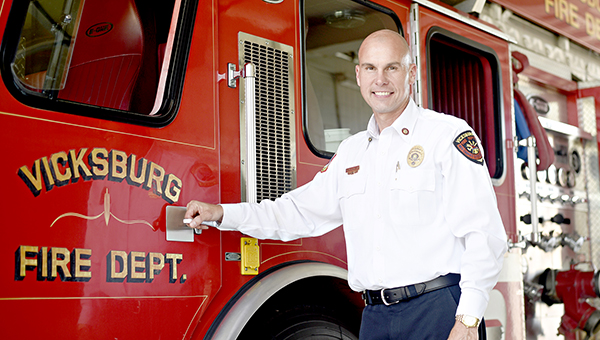 The holiday period from Thanksgiving to New Year’s Day is a time of joy and festivity and gathering with friends and family.

But the festive period can turn tragic if people fail to exercise caution and take the proper steps to ensure their holiday isn’t ruined by an accident that could have been prevented.

Vicksburg Fire Chief Craig Danczyk, Deputy Chief Derrick Stamps and fire investigator Nathaniel Williams discussed some fire safety tips at a recent meeting of the Board of Mayor and Aldermen that will make the Christmas season safer and enjoyable.

The leading cause for holiday fires, Stamps said, is electrical failures with tree lights, warning people they need to check the wiring on their lights and to be careful not to overload electrical circuits.

“If you have a natural Christmas tree, make sure you keep it well hydrated,” Danczyk said. “A dry tree is a fire hazard.”

According to a presentation Danczyk shared a dry tree not only can catch fire but will burn faster than newspaper.

Between 2013-2017, fire departments in the U.S. responded to an average of 160 home fires per year that started with Christmas trees. These fires caused an average of three deaths, 15 injuries and $10 million in direct property damage annually.

“Also be careful with candles,” Danczyk said.  December, especially around Christmas Eve and Christmas Day, is the peak time for candle fires, he said, adding the majority of those fires started in the living room.

“Be especially careful with candles if you have pets and small children,” he said, adding pets or curious children can knock over candles, injuring themself and possibly starting a fire.

Christmas Day and Christmas Eve are among the peak days for home cooking fires, Stamps said, pointing out cooking equipment was involved in one of every five, or 19 percent, of home fires.

“This can happen when a decoration or something like a potholder is left on or too close to a stove or other cooking equipment,” he said. “It could mean a fire that could damage your kitchen or your house.”

If a fire starts in the oven, Danczyk said, the proper action is to leave the oven closed, evacuate the house and call 911.

Another holiday tradition that carries the potential for fire is fireworks. Ten percent of fireworks fires occur during the period from December 30 through January 3, with the peak on New Year’s Day.

Also, do not use extension cords or power strips with electric space heaters because the cords and the power strips are not designed to handle the amount of electricity the heaters draw for power and can overheat and catch fire.

“We want everybody to enjoy their holidays,” Danczyk said. “The last thing we want is to have to respond to a tragedy over the holidays because of an accident.”