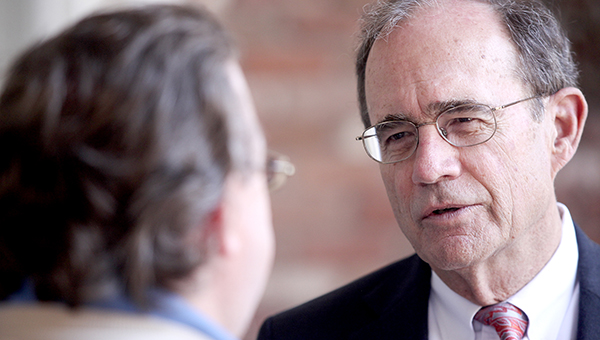 As he makes the transition from Secretary of State to president of the Mississippi Senate, Lt. Gov.-elect Delbert Hosemann is laying out an ambitious legislative program that targets raising teacher pay and improving infrastructure.

Hosemann, a native of Vicksburg, said he has been meeting with individual senators about the session, adding, “We’re very pleased about the meetings and the tone of those meetings has been excellent.”

He plans to focus on four areas of education.

“We’re going to fund pre-K, raise teacher salaries and provide funding for individuals with special needs; that’s an area that’s been underfunded,” he said. “We will be concentrating on workforce development. I have met with Hinds (officials) and other programs about having workforce development like the River City Early College. You will see us doing this statewide.

“We’re going to raise teachers’ salaries every year,” he said.

Hosemann said money for the raises will come from reductions in other state departments.

“We’re asking all state agencies, other than education and the judiciary and child abuse, to take a 1 percent cut next year,” he said. “Last year (as secretary of state), I turned back $1.5 million out of a $13 million budget. My budget was less than the day I started 12 years ago. We can do this.”

“I’m going to give the counties the option of instituting a use tax on gasoline and diesel,” he said.

The plan would allow voters to determine in a referendum if they want their board of supervisors to levy an additional gas tax to fund local infrastructure repairs and improvements.

“There will be a transportation plan devised by the board of supervisors and they will put that transportation plan to a vote in the November election for president,” Hosemann said. “If it passes those funds, 100 percent of every dollar that comes from that gasoline tax, will then go to the counties to fix county roads and bridges

“In Vicksburg, you have significant interstate traffic, so a lot of the money for that will be coming from people passing through.”

The local option tax, if approved by voters, Hosemann said, will have a sunset provision — a provision that the tax will end once the projects it funded are finished.

The counties will get more money for infrastructure projects under the local option proposal than they would under a statewide fuel tax, Hosemann said.

“Under the state fuel tax, the counties get only 23 cents of every dollar,” he said. “Under this, if they charge four cents a gallon, they get the full four cents.

“This gives the people in the county the ability to decide whether or not they want to increase their taxes. Some of these counties won’t need to do that. Some of them don’t want to have a use tax, and that’s fine; why tax everybody for counties that need that.”

Hosemann said 425 bridges are closed in Mississippi and 421 of them are on county roads.

He said the local option plan has received a good reception from senators and the county supervisors.

“This money will be in addition to money they already receive, and in Vicksburg it will be significant,” he said.

Looking at the state’s overall infrastructure, Hosemann said he has met with Mississippi Department of Transportation officials about additional state roads and bridges that need to be expanded on state highways or the Interstate system, including Interstate 20 in Vicksburg “from the Mississippi River bridge to at least Highway 61.

“The traffic has expanded, and there’s a lot of work that needs to be done there,” he said. “I’m hopeful our new Central Mississippi Transportation Commissioner Mr. (Willie) Simmons and others will find that is an appropriate expenditure of state funds to expand.”