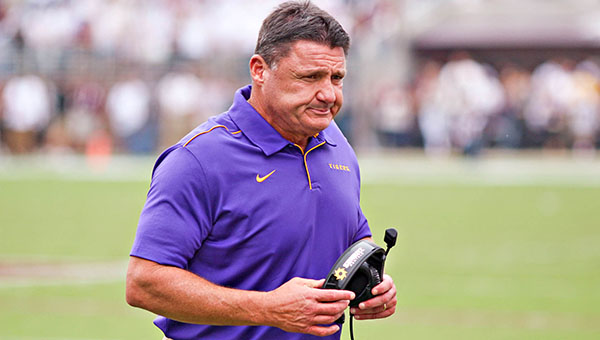 BATON ROUGE, La. (AP) — LSU coach Ed Orgeron and the No. 1 Tigers do little to disguise their lingering disgust about the way they lost a seven-overtime thriller at Texas A&M one year ago.

“We just felt helpless,” Orgeron said while reflecting on the excruciating and exhausting 74-72 loss that featured everything from spectacular clutch plays to disputed officiating and postgame fisticuffs. “We just felt that when our time comes, we’re going to do something about it — and now’s the time.”

LSU (11-0, 7-0 Southeastern Conference) hasn’t lost since, having won their bowl game to end last season and their first 11 regular season games in 2019.

Joe Burrow, who reportedly passed out in the locker room and needed multiple doses of intravenous fluids after last year’s meeting, grinned when asked after a victory over Arkansas last week if he was already looking forward to a rematch with the Aggies.

When pressed why he was excited, he responded, “A chance to go 12-0,” the smirk remaining on his face as he looked back at everyone, awaiting the next question.

Over in College Station, Aggies QB Kellen Mond said he wasn’t surprised by comments coming out of Baton Rouge.

“I kind of figured them to talk a little but, I mean, we can only control what we can control,” Mond said. “We feel like we’re a good team, too, and that we’ll definitely be ready to compete.”

LSU very nearly had last year’s meeting won. Orgeron even had a bucket of Gatorade dumped on him by players who thought the victory had been sealed.

“Obviously a little premature,” Orgeron said. “Our guys were fired up. We thought that we won the game three or four times.”

What looked like a game-clinching interception by Grant Delpit was wiped out when the replay booth intervened to say Mond’s knee momentarily touched the turf as he bent down to retrieve a bobbled snap before unloading the pass.

Shortly after, the clock ran out as Mond rushed to the line of scrimmage at the LSU 19 in an attempt to spike the ball and run one last play. Officials put one second back on the clock, allowing the Aggies to tie the game with a touchdown pass.

In the first overtime, A&M tight end Jace Sternberger appeared to lose a fumble moments after a reception, but officials decided after reviewing the play that Sternberger didn’t have possession long enough, and the pass was ruled incomplete.

In the seventh overtime, cornerback Greedy Williams appeared to have forced an eighth overtime when he broke up a pass on a 2-point conversion, but defensive pass interference was called, and the Aggies got another chance that they converted for the win.

As fans stormed the field in a chaotic celebration, the nephew of Texas A&M coach Jimbo Fisher aggressively shoved LSU analyst Steve Kragthorpe — who has Parkinson’s disease and a pace maker — in the chest. LSU assistant Kevin Faulk and Tigers safety John Battle joined in the brief scuffle.

“Everybody knows what happened,” Orgeron said. “It was a mess.”

“We owe those guys a lot from last year,” Edwards-Helaire said. “To understand that pain as a player, it doesn’t get any worse than that.”

“We’re going to be sky high, but we can’t be too high to where we’re committing a bunch of penalties and all that stuff,” Orgeron said. “But it’s going to be an emotional game, because of what happened last year, because of where we’re at right now. We’re 11-0. We want to finish the season undefeated. We know what’s ahead of us. It’s our last game in Tiger Stadium. … I can’t wait.”