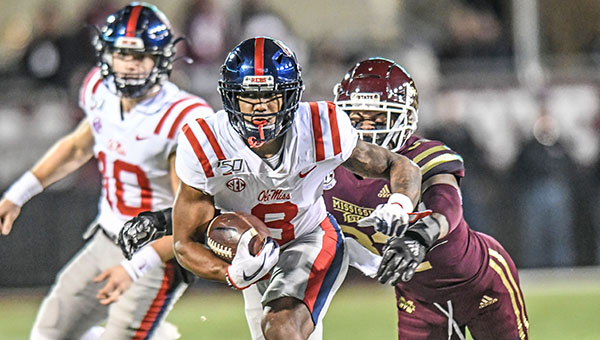 By early Friday morning, social media was filled with clever catchphrases for the 2019 Egg Bowl, some not suitable for a family-friendly newspaper.

Hours later, in the wake of the urination celebration, the pee that turned into an ‘L,’ the golden shower for the Golden Egg, they were still flowing fast and furious.

Luke Logan missed a 35-yard extra point after Ole Miss receiver Elijah Moore was penalized for celebrating a touchdown by crawling and pretending to urinate like a dog Thursday night. The twin gaffes allowed Mississippi State to escape with a 21-20 victory.

It was an embarrassing moment for Ole Miss, and prompted head coach Matt Luke and athletic director Keith Carter to issue a joint statement apologizing for it Friday.

“We want to apologize formally as a program to the Ole Miss family for the disappointing and unacceptable action that occurred at the end of Thursday’s game. Elijah is a fine young man who lost control of his emotions in the moment,” Luke and Carter’s statement said. “This incident does not reflect in any way the type of student-athletes on our football team or the culture of respect that permeates our locker room. Discipline is a staple of our program as evidenced by being the least penalized team in our league, and we will continue to uphold an uncompromising standard of behavior on and off the field. In maintaining our team’s high level of accountability, we will address the matter, and disciplinary action will be handled internally.”

Moore’s celebration came at the end of a remarkable last-minute drive that put the Rebels (4-8, 2-6 SEC) on the brink of tying the game, and might have earned its own place in Egg Bowl lore if it had turned into a game-winner.

With Ole Miss trailing 21-14 and less than one minute to play, Matt Corral threw a 57-yard pass to Braylon Sanders on fourth-and-24. The Rebels converted another fourth down inside the 10, thanks to an offsides penalty against Mississippi State. Five plays later, Corral threw a short pass to Moore and the receiver fought his way through a tackle and into the end zone to pull the Rebels within a point, 21-20, with four seconds to go.

Moore then crawled on all fours to the back of the end zone, lifted his right leg, and pretended to urinate like a dog.

It was a callback to a similar celebration by former Ole Miss receiver D.K. Metcalf after he scored on a long TD pass in the 2017 Egg Bowl. Unlike that one, which came in Ole Miss’ 31-28 victory, Moore’s was costly.

The PAT attempt was backed up 15 yards — Mississippi State coach Joe Moorhead elected to take it on the try rather than the kickoff — and Logan pushed it wide right.

“It got them down, probably a little bit. From the fourth-and-24 completion, the pass interference penalties, and kind of some of the other stuff, you know, the last penlaty happened and they did their little celebration,” Moorhead said of the final drive. “We had the option to take (the penalty) during the kickoff or the PAT. We took it on the PAT. I feel bad for that kid, but I feel great for the Bulldogs.”

Moore was spotted walking on the sideline after the touchdown carrying the Nasty Wideouts Belt that Ole Miss receivers earn after catching a touchdown.

The sophomore was not made available to the media after the game, but did issue a statement through the school on Friday along with Luke and Carter.

“I apologize to my teammates, coaches and Rebel Nation for my actions at the end of the game,” Moore said in his statement. “It was an emotional moment, and I deeply regret it. It does not represent who I am or who we are as a team, and I will grow stronger from this mistake.”

Moore’s was the latest in a long history of unsportsmanlike conduct penalties in this rivalry series, and not even the last in this game. After Logan missed the tying PAT, Mississippi State’s bench was issued one for coming onto the field in celebration. Ole Miss defensive end Tariqious Tisdale also received one for leaving the bench and leveling MSU punter Kody Schexnayder.

In 2018, every player on both teams got an unsportsmanlike conduct penalty for participating in an on-field brawl in the second half.

Luke defended Moore after the game, saying he was “disappointed” in his player while also saying he got “caught up in the moment.”

The bigger issue for the Rebels, Luke said, was an overall lack of discipline that was costly.

“We talked about it. We had five penalties,” Luke said. “We just wanted to play a clean game. Nothing after the whistles or before the whistles was going to help us win the ballgame.”