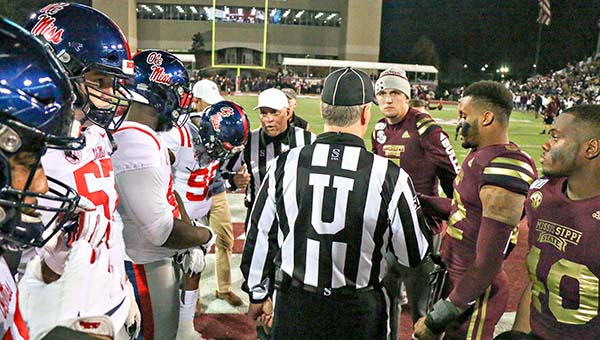 LET’S DO THIS: Ole Miss and Mississippi State football players gather at midfield for the coin toss before Thursday’s Egg Bowl at Davis Wade Stadium in Starkville. (Walter Frazier/For The Vicksburg Post)

Thanksgiving and the Egg Bowl go together like turkey and gravy. The rivalry game between Ole Miss and Mississippi State has been played on the holiday itself 26 times, including this year, and usually on Thanksgiving weekend since the 1920s.

My first few years in the newspaper business coincided with a burst of Thanksgiving-night Egg Bowls, from 1998-2003. I covered a couple of them and, while the games themselves were pretty unremarkable, they did leave lasting memories for me.

Ole Miss won the 2000 Egg Bowl in Oxford, and some of the fans were spilling from the stands onto the field. I saw one large group about to head toward me and then-Vicksburg Post sports editor Mark Thornton and suggested we head away from the sideline.

A few minutes later he did not return the courtesy.

Out of nowhere, a fan who might have been running from security — I never did see him — ran me over like former Ole Miss linebacker Patrick Willis flattening a running back in his prime. My notebook and pride went flying as Mark delivered what is affectionately known as “a lookout block.” He looked while I got crushed.

Two years earlier I also went to Oxford on a very rainy Thanksgiving. After finishing my story around midnight, I tried to transmit it over our quite primitive and occasionally cranky computer system.

This was in the early days of the internet, and lightning-fast WiFi was not yet a thing. We had to use a phone line that might or might not connect. On this occasion, it did not, and after 45 minutes of trying the Ole Miss sports information staff was giving the “wrap it up” signal.

We published in the morning back then, so I did what seemed logical. I drove a slow four hours back to Vicksburg, thanks to the rain and a beat up car with balding tires, and got to the office at 5 a.m. I proceeded to retype my 1,000-word game story directly into our computer system, finishing just as Mr. Thornton was arriving and wondering what I was doing there.

I still work most Thanksgivings because of the nature of the business, but haven’t covered the Egg Bowl in person since those early days. It’s not entirely a bad thing. I get to spend Thanksgiving at home now, and eat a proper meal instead of one helping of press box turkey. Considering my luck at those other Egg Bowls, maybe that’s something to be really thankful for.