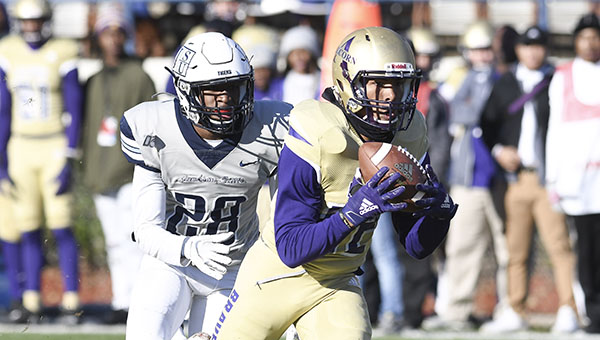 When he was asked about the plans for he and his team during Thanksgiving week, Alcorn State head coach Fred McNair flashed a wide smile before letting it slip that he’ll be like most fans.

“You sit back and watch the Bayou Classic and see who you’re going to play after that. It’s always good to get a little rest,” McNair said.

The rest is short-lived, of course. Alcorn’s work is far from done.

Southern University and Grambling play in New Orleans on Saturday afternoon, with the winner claiming the West Division championship.

In between, Alcorn will slip into a familiar routine. This is the sixth year in a row it has claimed the East Division title and had a bye week to rest, recover and prepare before the SWAC championship game.

“What we normally do is get back to work on Monday, up until Wednesday. I’m going to let these guys go home and eat some turkey because I can’t feed them,” McNair said.

Alcorn’s run is unprecedented. No other team has won more than three division titles in a row. The streak has endured through roster turnover and a coaching change — Jay Hopson led the Braves to the first two titles, and McNair to the last four — and included three wins in the championship game.

“The biggest thing, when I look back and think about the things we’ve accomplished as a program, I always think about the coaching staff we have and how close we are in the preparations for each and every week,” McNair said. “We’ve got a great group of young men that works hard in the classrooms and on the field. Any time you can win six in a row, it’s a testament to what you do in recruiting and keeping this team focused.”

McNair said some of the success has been self-sustaining. Besides building a winning culture in Lorman, he said the coaches and players have learned how to pace themselves during the season.

The SWAC champion will play MEAC champion North Carolina A&T in the Celebration Bowl in Atlanta on Dec. 21 for the black college football national championship.

“The teams that fall by the wayside are the ones that aren’t used to a long season. That’s when you have to regenerate more energy. But these guys know what to expect from this coaching staff,” McNair said.

The road to Atlanta runs through Lorman once again. Alcorn clinched home field advantage for the SWAC championship game for the second year in a row. It was played in Birmingham and Houston from 1999-2017, before moving to campus sites beginning in 2018.

That, too, will help the Braves, McNair said. Alcorn has won five games in a row at Jack Spinks Stadium against Southern and Grambling since 2017, and nine straight home games overall since the middle of last season.

“Any time you’re playing a game at home, it’s always big in front of your home crowd and fans, and all the excitement that comes with it, and getting a chance to sleep in your own bed. That’s the biggest thing,” McNair said. “You get a chance to rest and prepare for an extra day since you don’t have to travel.”