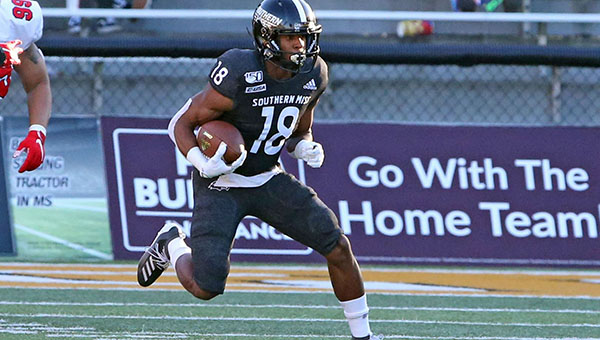 Southern Miss running back DeMichael Harris, a former St. Aloysius star, has 516 rushing yards and five touchdowns this season. He and the Golden Eagles will finish the regular season Saturday, on the road at Florida Atlantic. (Joe Harper/Southern Miss Athletics)

With five teams still alive for the two spots in the Conference USA championship game, everyone in the league has been trying to sort out the various tiebreaker scenarios in this final week of the regular season.

Southern Miss lost one of them not on the field, but on a conference call.

Conference USA’s athletic directors voted on Monday to change its eighth and final tiebreaker from one that gave Southern Miss a clear path to the West Division title, to one that almost eliminates it from contention.

The late change, which was only announced through a statement from the conference, frustrated Southern Miss athletic director Jeremy McClain.

“I was made aware of concerns regarding the C-USA division tiebreaker on Monday,” McClain said in a statement. “While the adjustments are well-intentioned, I expressed serious concerns over the timing of the changes on our conference call, and we were outvoted by the league’s membership.”

The controversy started with a strange set up for the final day of the regular season.

Under the original scenario put forth by the conference as late as Monday morning, the tie would have been broken by tiebreaker No. 8 — the team that has gone the longest without playing in the championship game.

That would have been Southern Miss, which last reached the championship game in 2015. Louisiana Tech played in it in 2016, and UAB last season.

On Monday, Conference USA’s athletic directors held a conference call to discuss changing the rule, and it passed by a majority vote.

Under the new tiebreaker, the three-way tie would be decided by an average of six different computer rankings. Louisiana Tech would likely win that one, meaning Southern Miss must finish ahead of the Bulldogs outright in the standings.

Louisiana Tech is ahead of USM and UAB in four of the six computer rankings. Southern Miss is ahead in one, and UAB in another.

C-USA officials released a statement Tuesday saying the purpose of the change was to weigh factors from this season, and not past ones.

“This mirrors the policy to determine the host and enforces the intent that the competitive results determine the outcome,” C-USA assistant commissioner Russ Anderson said in a release.

Southern Miss head coach Jay Hopson had his weekly news conference Monday, before the change was finalized, and has not commented publicly on the issue.

The end result of the change is that Southern Miss’ path to the West Division title requires it to beat Florida Atlantic and hope UTSA upsets Louisiana Tech.

Louisiana Tech wins the West with a victory, along with a Southern Miss loss.

UAB takes the title with a win over North Texas (4-7, 3-4), along with a Southern Miss loss.
If all three win, then it goes to the three-way tiebreaker scenario with the computer rankings deciding things.

Louisiana Tech coach Skip Holtz had his news conference on Tuesday and, not surprisingly, seemed to be a fan of the switch.

“Those things need to be determined on the field. We don’t even know if it’s going to become a factor this year,” Holtz said. “I certainly think it was a move to get something right, and I applaud the efforts of the people involved to stand up and say this is the spirit of the law. Sometimes these rules are written into a book during the offseason, but when you get into the heat and the reality of it, I think they got everything right.”