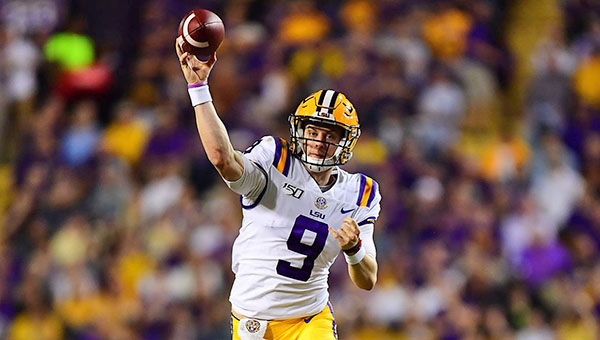 BATON ROUGE, La. (AP) — Joe Burrow padded his Heisman Trophy resume with 352 yards and three touchdowns passing, and No. 1 LSU beat Texas A&M 50-7 on Saturday night to give the Tigers their first unbeaten regular season since 2011.

Burrow’s night was highlighted by a deep, pin-point accurate pass on a 78-yard touchdown strike to Ja’Marr Chase, who had 197 yards and two touchdowns on seven catches.

Burrow has 4,366 yards and 44 touchdowns passing this season, smashing LSU single-season records in both categories. Burrow’s yardage total also broke the Southeastern Conference record, which had stood since Kentucky’s Tim Couch passed for 4,275 yards in 1998.

Burrow ceremoniously left the game after opening a possession with his 23rd completion early in the fourth quarter. He raised his arms to salute the Tiger Stadium crowd, which went wild as he jogged to the sideline and embraced coach Ed Orgeron before exchanging more hugs with seemingly every coach and teammate in the bench area.

Soon afterward, junior running back Clyde Edwards-Helaire was beckoned by coaches to the sideline in a similar manner, finishing his night with 87 yards and a touchdown.

Chase’s touchdowns gave him 17 this season, building on his school record that the Biletnikoff Award finalist broke two weeks earlier. The sophomore receiver has 1,457 receiving yards this season.

LSU’s victory raised the likelihood the Tigers would receive a berth in the College Football Playoff even if they were to lose to No. 4 Georgia in next weekend’s Southeastern Conference championship game.

Currently, LSU is one of just three remaining undefeated Division I FBS teams in the nation, along with Ohio State and Clemson. Also, the Tigers had four victories over teams — Texas, Florida, Auburn and Alabama — that were ranked in the top 10 at the time of the matchup.

The victory clinched a trifecta of sorts for LSU coach Ed Orgeron. He beat two coaches — Texas’ Tom Herman and A&M’s Jimbo Fisher — whom LSU sought to hire before settling on their burley, raspy-voiced Cajun coach who grew up rooting for LSU in a house within shouting distance of shrimp trawlers on the Bayou Lafourche.

Orgeron also defeated Nick Saban, a boogeyman of sorts to the LSU faithful since he started winning national championships for archnemesis Alabama a decade ago.

Edwards-Helaire’s 5-yard TD on LSU’s opening possession began a first-half onslaught in which LSU scored on its first five possessions, racing to a 31-0 lead by halftime.

Kellen Mond completed just 10 of 30 passes for 92 yards and was intercepted three times — once each by Grant Delpit, Jacoby Stevens and Kary Vincent. Isaiah Spiller’s 1-yard TD run provided the Aggies’ only score.